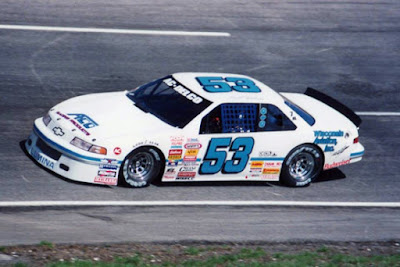 
Oregon, Wis. (September 12, 1993) - A little luck and a lot of practice went into Scott Hansen's victory at Madison International Speedway on Sunday afternoon.

Hansen’s car was clearly the fastest as he surged into the lead on lap 21 of the American Speed Association’s Madison 200 and stayed in front despite losing his brakes during the nationally televised race on TNN.

A native of Green Bay who now lives in Milwaukee, Hansen held off West Salem's Jay Sauter with the help of 10 caution periods, including the final yellow flag on lap 196 of the 200-lap event. It was the first American Speed Assocation race at the track since 1986 when it was called Capital Speedway.

“We needed every caution there was because we were out of brakes early,” said Hansen, who practiced with his short track car at MIS on Thursday and then ran in the track’s weekly Friday night program.

“We just learned a lot – how tight the race track was – and incorporated some of it into this car and it worked out real well,” he added. “It’s a good thing it wasn’t 210 laps.”

Hansen’s triumph also tightened the ASA points race, moving him within 37 points of leader Johnny Benson Jr. Benson, who has 2,484 points, spun and hit the turn four wall on lap 21 and went on to finish 24th, 25 laps down.

Sauter said the numerous yellow flags only hurt his chances to capture his first ASA race of the season.

“After the re-starts my car was a little slow for about two laps,” he said. “I just didn't need the yellows at the end. With two more laps, maybe we could have got (Hansen).”

It was Bickle’s first ASA race since 1991, and he said he was “tickled’ with his top 10 finish considering he never saw the car he drove until about 15 minutes before race time.

“I got killed on re-starts,’ said Bickle, who started last in the 35-car field after narrowly failing to qualify for Saturday night’s Winston Cup Miller Genuine Draft 400 at Richmond (Va.) International Raceway.

Joe Shear (11th) of Clinton and Ken Lund (13th) of Oregon both completed all 200 laps. Dave Watson of Baraboo crashed on lap 75 and finished 31st, and Winston Cup driver Dick Trickle, a Wisconsin Rapids native, was 33rd after a mishap on lap 69.