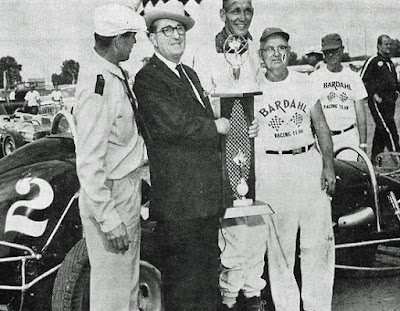 Lincoln, Neb. (September 2, 1967) – One mistake can make a big difference in sprint car racing, especially with the caliber currently being displayed at the Nebraska State Fair. It usually means the difference between winning and losing as Lincoln’s own Joe Saldana can testify.
Saldana, who led all qualifiers in Saturday afternoon’s time trials with a 26.12 second clocking, won the consolation race in record time, took the lead from the pole position in the A feature and held it for the first 24 of the scheduled 30 circuits.
But on the backstretch of lap 24, Saldana bobbled a little, allowing Don Daniels, who had been close behind from the start, to gain the inside position, take the lead and eventually the victory.
“I goofed up when I went into turn three and as soon as I did, I was up in the loose marbles, and he (Daniels) was right there waiting,” Saldana remembered after taking runner-up honors.
“I knew he would be, but all I could do was let him go,” remarked the 22-year-old super modified veteran. I took her in to deep and thought I could hold it, but I dipped out.
Saldana is in his first season as a sprint car driver but has been piloting super modifieds since he was 16 years old. He says he wants to keep driving sprint cars, eventually quitting super modifieds altogether, “because these guys are all racers”.
Daniel’s victory was the 434th feature victory for his Chevy-powered car, which has also won 703 heat races since it was built in 1953 by Hector Honores of Pana, Ill. The car, called the “Black Deuce” is the winningest sprint car in IMCA history, according to officials.
Saldana’s time of 4 minutes and 30 seconds for 10 laps in the consolation was the last of three track records to be set during the first day of sprint car racing at the Fair. Saldana bettered the old mark of 4 minute and 38 seconds while Jim Smith of Burgoon, Ohio, lowered the 8-lap standard from 3 minutes and 40 seconds to 3 minutes and 36 seconds to win the first heat.
Grady Wade of Wichita, Kan., was times in 2 minutes and 15 seconds in winning the 5-lap STP trophy dash, bettering the old mark of 2 minutes and 18 seconds.
Jerry Blundy of Galesburg, Ill., and Ray Lee Goodwin of Kansas City were the other heat winners.