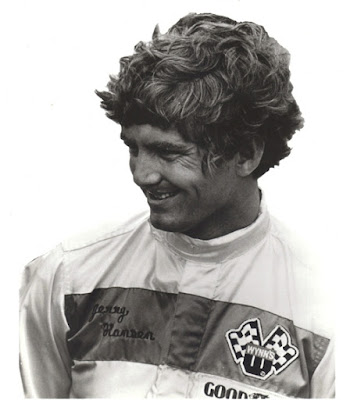 
St. Paul, Minn. (September 3, 1972) –Jerry Hansen, a 33-year-old Minneapolis driver, wheeled his orange #44 Lola Chevrolet superbly around the half-mile Minnesota State Fair track, to win by a three-lap advantage in the International Motor Contest Association (IMCA) Golden Gopher 200-lap sprint car race before 9,972 fans on Sunday.
Making his circle track debut, the sports car racing star outclassed a starting field of 24 drivers on a rainy afternoon, which made necessary 76 yellow flag caution laps.
Hansen picked up $3,000 first place prize money in the race, which offered a total purse of $13,000. He also received the Governor’s Cup, a check for $250 from the STP Corporation, a helmet from Sterling Products Co., and two tires and wheels from Hoosier Racing Tire Corp. Roy Campbell, Hansen’s crew chief, received a set of tools from S-K Tools.
Hansen was given approval by IMCA officials to drive his unique machine in the race after removing the wing and spoiler from the car and placing the oil pan under the machine.
Happy with the way his car handled on the paved half-mile oval, Hansen said he enjoyed the experience of driving against a field of drivers he termed the best he has ever competed against.
“I felt comfortable out there going wheel to wheel,” said Hansen. “Jerry Richert really impressed me with his driving.”
“We’ll be back next year,” he added.