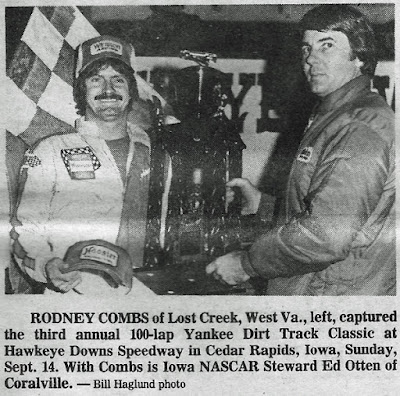 Cedar Rapids, Iowa (September 14, 1980) – Rodney Combs of Lost Creek, W.Va., led only two laps on Sunday night, but one of them was the final lap of the race as he captured the third annual Yankee Dirt Track Classic 100-lap feature at Hawkeye Downs Speedway.
In what was one of the most competitive 100-lap races ever held on the Downs’ half-mile – 14 cars were running on the lead lap at the end – Combs took the lead from Leon Plank of Mondovi, Wis., as the two leaders drove through lapped traffic in turn four of the final lap.
The only other time Combs led was on the 98th go-round when he and Plank crossed the start-finish line side-by-side with Combs’ front bumper barely in front of Plank’s car.
Pole-sitter Roger Dolan of Lisbon, Iowa, took the lead at the start of the event and held the top spot until lap 48 when Plank moved from third to first in one move going through turn two. Plank then led through lap 97, and again on lap 99.
Obviously happy with his win, Combs nonetheless had high praise for Plank.
“He drove one heckuva race,” Combs said. “I know what he must be feeling because I’ve lost a few races the same way he did tonight. As it was, I could only run on the outside and he was really hooked up on the inside and it would have made for one heckuva finish without those lapped cars in the way. I was just fortunate enough to be hooked up on the outside groove.”
The two leaders came up on two lapped cars – one on the outside and one on the inside.
Plank was obviously not a happy man after the race. At first refusing to comment, he finally remarked, “Niffenegger (Mike) got sideways in front of me and I had to hit the brakes. That cost me the race.”
Combs’ win marked the first time an out-of-stater had won the Yankee Classic. Verlin Eaker of Mechanicsville, Iowa won the initial event in 1978 and Fred Horn of Marion, Iowa, won last year’s race.
Plank, although he resides in Wisconsin, had raced at Hawkeye Downs enough to be considered a regular by many in the crowd and the final result was not a popular one with many in the stands.
However, Combs showed a lot of class as he was interviewed afterwards.
“That’s racing,” Combs said. “I feel very badly for Leon, but it’s happened to me before. I know how he feels.”
Finishing behind Combs was Plank, Dolan, Dick Schiltz of Waterloo, Iowa and Kevin Gundaker of St. Louis.
Combs’ win was worth $5,000, Plank earned $4,000, Dolan $3,000 of the $25,000 purse.
Combs also broke the track record in qualifying, eclipsing Dick Schiltz’s mark of 23.172 seconds with a new mark of 22.265 seconds.
Billy Moyer Jr. of Des Moines won the trophy dash while heat wins went to Gundaker, Horn, Dick Potts of Morocco, Ind., Jim Curry of Norman, Ind., John Connolly of Delhi, Iowa, and Plank. Dave Chase of Council Bluffs, Iowa, won the consolation.