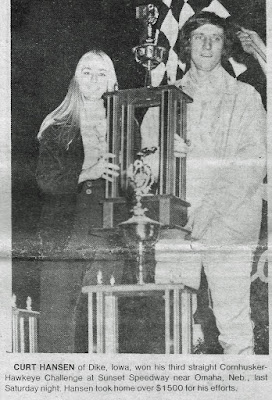 Omaha, Neb. (October 1, 1977) – Iowa continued the domination of the annual Cornhusker-Hawkeye Challenge as 32-year-old Curt Hansen of Dike, Iowa, won the sixth annual event.
Hansen, who started on the pole, took the lead at the drop of the green flag and led for the first 78 circuits before relinquishing the top spot to Ed Sanger of Waterloo, Iowa. The two would make a race of it from there on, racing side-by-side numerous laps. It was midway thru turns three and four of the last lap that Hansen pulled to the outside of Sanger and powered past him for a half a car length victory.
Hansen received $1,200 for the win plus $310 in lap money for leading 78 laps. Sanger would pick up the remainder of the lap money giving the Hawkeyes all 100 laps.
Bob Kosiski of Omaha placed third for the only Cornhusker finish in the top five. Kosiski was one lap off the winner’s pace while fourth and fifth places were four laps down. Joe Merryfield of Des Moines was fourth and Bob Shryock of Estherville, Iowa, placed fifth.
Second place seemed to be the hard luck spot in the field as Don Hoffman of Des Moines blew an engine while running second. Then on lap 22, Bob Shryock was black flagged for a trunk lid falling off while running second.
Dick Schilitz of Waterloo, Iowa, inherited second place only to have his battery cable come loose after 11 laps. Don Styskal of Fremont, Neb., moved into the number two spot until lap 62 when he exited with mechanical issue. Sanger moved into second at that point and went on to finish there.
The feature was started and stopped after one lap because of dust. The track was watered and thee race was completely restarted.
Nebraska did come through for two wins during the afternoon show with Kent Tucker of Aurora, Neb., winning the fourth heat and Jim Van Wormer, also of Aurora, winning the second consolation.
Other wins went to Hansen, Hoffman and Sanger while Denny Hovinga of Laurens, Iowa, won the first consolation.
Forty-eight cars entered, representing Iowa, Nebraska, Colorado and Kansas.