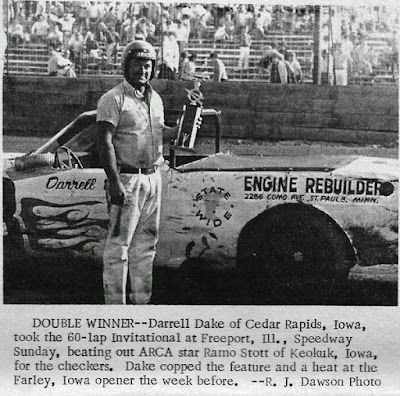 Freeport, Ill. (September 28, 1969) – Darrell Dake of Cedar Rapids, Iowa, won the 2nd annual Midwest Invitational on Sunday evening.
Dake took the lead from Ramo Stott of Keokuk, Iowa, in the closing laps of the 60-lapper and took home the $800 first prize plus lap money.
Earlier in the afternoon, Stott won the 200-lap feature at the National Short Track Championship at the quarter-mile, paved Rockford Speedway.
Roger Dolan of Lisbon, Iowa, started on the pole and was off and running in his Plymouth Roadrunner. Dolan was never challenged until he broke an axle midway through the race.
Stott inherited the top spot and was pressed the whole way by Dake and Freeport Raceway champion Lem Blankenship of Keokuk, Iowa.
Dake banged on Stott’s bumper as the laps ticked off and when Stott got loose, spinning through the infield, Dake sped by for the lead and the victory.
Dake also won the trophy dash as he started on the pole and led all six laps. Dake was chased in the trophy dash by Dolan and Stott.
Bill Forbes of Rock Falls, Ill., piloted his Pontiac GTO to victory in the semi-feature. Forbes and Red Droste of Waterloo, Iowa, battled wheel-to-wheel for the entire race.