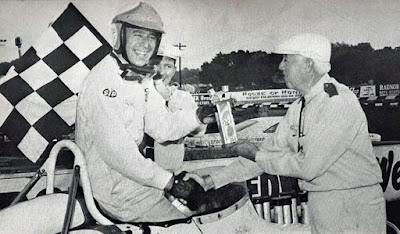 Nashville, Tenn. (September 22, 1968) – Jerry Richert of Forest Lake, Minn., was the most excited person at the Tennessee State Fair after winning the 30-lap IMCA sprint car feature event on Sunday afternoon.
Richert, who has already clinched the IMCA sprint car national championship, said, “I’ve been trying for 10 years to win on a banked track and it feels wonderful.
Richert revealed that the car he drove set a record for 30 laps two years ago when it was driven by Don “Scratch” Daniels.
“Scratch told me I could win with it, but I didn’t think I could do it. I can’t believe it,” said Richert, who has been driving race cars since 1951.
Finishing second was Don Nordhorn of Mitchell, Ind., Saturday night’s feature winner, while Tom York of South Bend, Ind., was third. Ray Wright of Elkhart, Ind., took fourth and Dick Gaines of Mishawaka, Ind., rounded out the top five.
Local favorite, Jimmy Griggs of Donelson, Tenn., ran second most of the feature until encountering mechanical difficulties.
Two of Griggs’ old sprint records were broken in heat races. In the second 8-lap heat race, Dick Gaines won in 2 minutes and 44 seconds breaking Griggs’ old mark of 2 minutes and 48 seconds.
In the 5-lap trophy dash, Richert was clocked in 1 minute and 41 seconds beating Griggs’ standard of 1 minute and 42 seconds.
One of the hard luck drivers at the track was Don Carmichael of Hobart, Ind. Hobart set a new track record in qualifying on Saturday night only to have two cylinders go out on his car. On Sunday afternoon, Carmichael was stricken again when the mag went out.