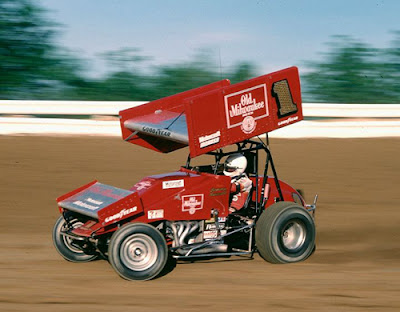 Swindell bounced the Raymond Beadle/Old Milwaukee #1 sprinter over the rutted half-mile oval in a real “rib-cage rattler” of a win over Keith Kauffman of Mifflintown, Penn., who was expertly driving the Stanton #75.

Swindell’s win came from advancing from an outside second row starting spot. The two-time World of Outlaws’ champion gained the lead on lap 9 from early pacesetter Doug Wolfgang. Wolfgang went on to finish third in the event ahead of current National Challenge Series point leader Steve Kinser.

Jeff Swindell crossed the finish line fifth, but the lead-footed lad had jumped a position on a restart and was penalized tow spots. Jac Haudenschild and Bobby Allen were awarded fifth and sixth respectively, while the younger Swindell reluctantly settled for seventh.

Brad Doty broke the World of Outlaws jinx, that being the fast qualifier crashing. Doty established fast time in qualifying, touring the half-mile in 18.62 seconds fr the evening. Although he didn’t crash, Doty didn’t stop his car to avoid one of the turn one melees and was restarted at the rear of the tail.