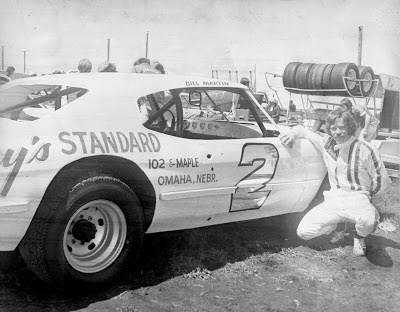 They won’t this year. Martin opened the 1974 racing season with a stock car feature victory at the Marion County Fairgrounds Sunday.

"I changed jobs and started to manage my dad's apple farm," the 29-year-old said, after receiving his victory laurels.

“We grow vegetables too, so I had a lot to learn so it didn't leave a lot of time for racing." Fact is, Martin raced a total of four times that year.

The former truck driver hasn’t forgotten his lessons of five years of racing. He won the fourth heat, finished second in the trophy dash before winning the 20-lap feature in his 1972 Chevelle.

“What a great way to start out again,” he remarked.

Martin had a tough battle with Waterloo, Iowa's Red Dralle before he could collect the $600 winner’s share.

Dralle, also driving a 1972 Chevelle, was leading until Bill took over the point on lap 10. Dralle didn't give up and stormed back to overtake Martin on lap 15. A couple of laps later, though, Martin grabbed the lead and made it stick, capturing the checkers on the historic half-mile.

“It was a great race,” said Martin. “It was really fun having someone like Red (Dralle) beating on your door.”

Dralle would settle for second while Omaha's Bob Kosiski, Ken Walton of Viola, Iowa and Don Hoffman of Des Moines would round out the top five. In addition to Martin winning his heat, Dralle, Omaha's Ed Morris and Council Bluff's Dave Chase were winners. Dralle would also cop the trophy dash money. John Connolly of Delhi, Iowa, won the consolation and Council Bluffs' Bob Jiskra was tops in the Australian Pursuit.

The car Martin drove to victory lane was owned by Larry Kelley of Omaha. It was a car previously driven by Ed Sanger the year before in which "Fast" Eddie won a staggering 44 times in it. Martin mentioned after the race, "I hope we can win half or a fourth of that total this year."

Chuck Berg of Des Moines has had a change of jobs too. He was the flagman Sunday, the first time he had that responsibility for auto races. Usually, he’s behind the wheel of a race car.

“I didn’t have a ride in stock car going, so I thought I’d give this a try,” he said.