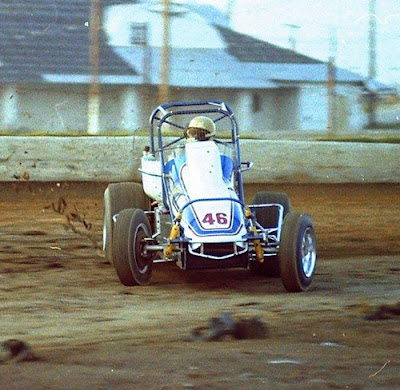 Reading, Penn. (April 14, 1979) – Regulars on the United States Auto Club’s sprint car circuit are wishing Paul Pitzer would have kept his word when he announced his retirement two weeks ago.

But having second thoughts about the decision, Pitzer ended his brief hiatus Saturday night at the Reading Fairgrounds and proceeded to win the sprint division’s 40-lap feature.

Pitzer’s winning effort was aided by a caution period which enabled him to close in on front-running Sheldon Kinser late in the chase. Pitzer than passed Kinser shortly after green flag racing resumed and went on to pick up the victory.

The early pace was slowed by caution period spin by Larry Rice and then another yellow for a tangle involving Rice and Joe Saldana on the restart following the first slowdown. The second caution sent Rice and Saldana to the pits.

Fresh from a record-setting 22.684-second mark in time trials and a victory in the semi-feature, Kinser took second from Snellbaker on lap 9 and claimed first place one lap later.

Snellbaker promptly regained second place by getting by Cassella but would yield the runner-up spot to Pitzer on lap 16.

Kinser opened up a commanding advantage by the event’s midway point but was slowed by heavy traffic allowing Pitzer to chop away at his lead.

Then, four laps from the finish, Billy Stief spun bringing out the yellow flag and allowing Pitzer to close in on Kinser. After action resumed, Pitzer darted around Kinser with two laps to go and sprinted to victory.