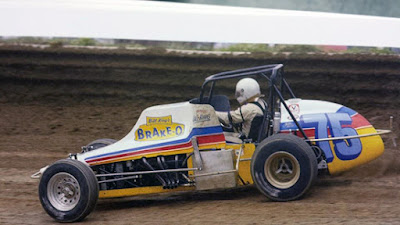 Rossburg, Ohio (April 26, 1981) – A first time ever was recorded with the appearance of the United States Auto Club’s Dirt Championship Cars.

Well known racer Tom Bigelow turned in a fast qualifying time of 17.113 seconds, which will stand as track record for future races at Eldora Speedway. The 24 entries were broken into two heat races, won by Tom Bigelow and the King of the Outlaw's, Steve Kinser.

A change in rules now makes it possible for drivers who are not sanctioned with USAC to compete on the Dirt Champ circuit.

The 100-lap feature was dominated by Steve Kinser, who took the lead with the drop of the green flag and held it the entire 100 laps.

The red flag was brought out on the 41st lap when Bobby Olivero hit the cement retaining wall in the fourth turn, sending his sprinter end over end, until finally coming to rest back on its wheels at the bottom of the track. Olivero escaped injury.

Larry Rice and Larry Dickson were also taken out of the action by separate accidents.

Sheldon Kinser, who was in the tangle with Rice, managed to escape damage, but was forced to return to the tail of the field, where as he was in second position.

Gary Bettenhausen, the defending Dirt Champ qualified his car, but put Steve Chassey in his place for the feature race, which meant by USAC rules that Steve would also start on the rear.

The end result of the feature was Steve Kinser in victory lane, then came Jack Hewitt, Steve Chassey, Paul Pitzer, and cousin to the winner, all-time favorite Sheldon Kinser.

At the close of the activities Sunday, promoter Earl Baltes was given an award in appreciation of all he has done for this area's racing and in recognition of the fact that over $1 million dollars has been handed out in prize money since 1965.