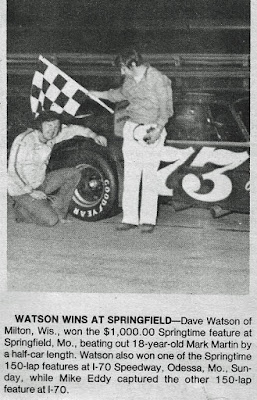 It was another fender-to-fender finish for the 18-year-old Martin, but for the first time in three weeks, he did not win.

Traffic around the half-mile asphalt track thwarted Martin’s bid for another last lap victory. He drove outside of Larry Schuler, Lockport, Ill., out of the final turn of last week’s race to win by a fender.

A fourth-turn maneuver on the track apron wasn’t enough this time. Watson, winner of the Fairgrounds’ Missouri Asphalt Championship last year, won by a car length.

Martin pulled to Watson’s bumper on lap 47. He fell back four laps later when Watson found the quickest way through a group of slower cars.

Martin quickly made up the ground, but traffic on the final lap worked against him.

Watson and Martin stayed bumper-to-bumper around two cars through the first two turns on the last circuit. Martin’s dive under Jim Cook on the track apron wasn’t enough as the leaders entered the main straight.

“I had less hope this time than I did last week,” Martin said afterward. “I knew there wasn’t any chance.”

Martin, of Batesville, Ark., was not in the running until lap 35. He was in fifth place before moving past Ed Hoffman of Niles, Ill., through the second turn of that lap.

Martin caught the third-place car, Fred Tiede of Marionville, Mo., down the front straightaway three laps later. In another two circuits, he was around Mike Eddy of Kawkawlin, Mich.

After a short stoppage on lap 40 because of rain, Watson and Martin battled nose-to-tail.

The Watson – Martin duel took away from some of the tight racing back in the pack. Hoffman held on for third but David Goldsberry of Bolivar, Mo., made a late charge past Tiede and Eddy for fourth. Eddy pitted a few laps away from the finish with engine trouble.

Other favorites, Larry Phillips of Springfield, and Bob Senneker of Dorr, Mich., were cut down by mechanical issues. Senneker never started the main event and Phillips dropped out on lap 13 while running in second place.