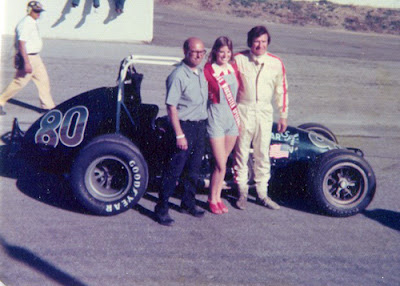 Dickson, driving the Ernie Ensign Maude Special, also tied the one lap world record in qualifications of 16.16 seconds around the high banked one half-mile paved oval. Co-owner of the record, Bruce Walkup, originally set the mark July 28. 1974 The average speed for this time is 111 386 mph.

Billy Cassella, driving the Louis Seymour Enterprises machine led only two laps of the 40-lap feature before the yellow flag came out due to a spin on the backstretch by Jerry Poland

When the track was cleared and the green-flag fell, Dickson streaked past Cassella on the third lap and built up a sizable lead proving to the crowd he is the King of the USAC sprints with 37 sanctioned feature wins to his credit.

He was not injured.