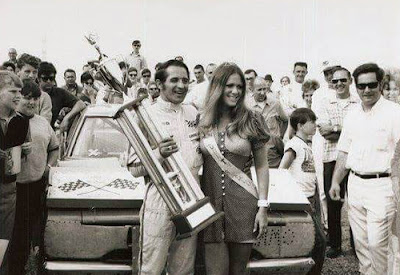 Ramo Stott embraces the laurels of victory after winning the 100-lapper at Tri-County.

Stott, of Keokuk, Iowa, turned the 50 miles on the half-mile dirt in 38 minutes and 8 seconds, winning by 20 car lengths. He took the lead on lap 13 and never relinquished the top spot.

He was also the fastest qualifier, won the fast dash, the first heat and the Australian pursuit all of the events that he competed in. He expressed doubt about how he would race before the event because he was driving the car for the first time.