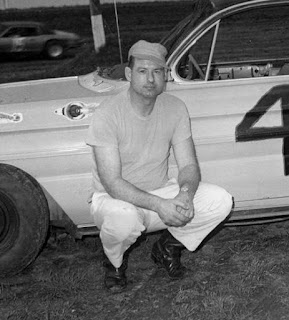 A real dogfight took place between DeFrance and Tom Stewart of Washington, driving a 1967 Chevelle. Stewart would lead the first 10 circuits with DeFrance hot on Stewart’s tailpipe.

DeFrance would power by Stewart on lap 11 for the lead and withstand numerous challenges from Stewart until he retired on lap 22 with mechanical difficulties.

Curt Hansen of Dike, Iowa, driving a 1969 Ford Tornio, would inherit second place behind DeFrance and stay there until the end of the race.

Tom Hughes of Monticello, Iowa, took third in a 1964 Ford, Dan Clement of Rhodes, Iowa, in 1962 Chevy, took fourth and Dick Oldham of Des Moines, behind the wheel of a 1955 Chevy, took fifth.

George Barton of Ankeny, Iowa, was quick timer in time trials, speeding around the big half-mile in 28.84 seconds.

Hansen started of the chilly afternoon by winning the 5-lap trophy dash. DeFrance won the first 7-lap heat with Joe Alsin of Ankeny, Iowa, the winner of the second heat. Dan Clement was the third heat winner.