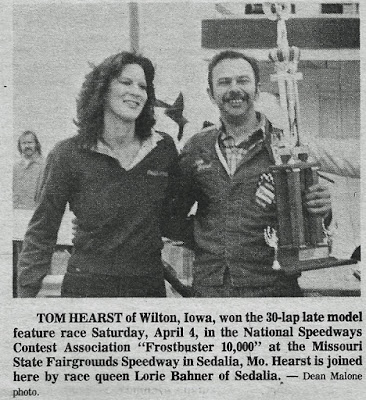 Sedalia, Mo. (April 4, 1981) – Iowa drivers were dominant on Saturday afternoon as the late models roared to life for a new season in the opening half of the “Frostbuster 10,000” at the Missouri State Fairgrounds Speedway.

Overcast skies and cool temperatures kept the afternoon crowd down, but racing action warmed those winter-weary fans in the stands, estimated at 1,400.

Heading the Iowa contingent was Tom Hearst of Wilton, Iowa, who finished second in last season’s National Speedways Contest Association point race. Hearst captured his heat race and then the 30-lap feature to take the lead in this year’s NSCA title chase.

Fifth drivers from six states were on hand for the opener, contested on the half-mile dirt oval.

Joining Hearst with heat wins were Rick Standridge of Divernon, Ill., Walton, and Gary Webb of Davenport, Iowa. Webb ran among the feature leaders until he retired with a badly smoking motor.

The last chance race was won by Dick Potts of Morocco, Ind.

In the feature, Hearst stormed to the front from his outside front row starting spot and was never headed. The track began to break up during the early going and was tough on both drivers and machines, many of them newly finished for the ’81 season.