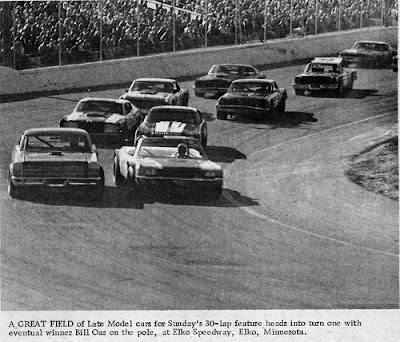 The businessman-driver had the advantage of starting on the pole and he went full bore for 30 laps to pocket a hefty chunk of the green.

But race fans went home buzzing about the brilliant second and third-place finishes of Norm Setran of Bloomington and Dick Giles of Minneapolis. Setran, a veteran of 16 seasons, started ninth and Giles punched it from his 12th starting position, yet both were challenging Oas at the finish. For Giles, it was the second straight Sunday finishing third in the feature and the second straight Sunday he won both his heat and trophy dash.

Setran won his heat as did Oas while Larry Behrens of Northfield won the consolation.

There were no serious accidents although Mert Williams of Rochester spun twice, and Behrens had issues after blowing a tire.

Of interest to many was the first appearance of the “Flying Finn”, Bob Jusola of Burnsville. Jusola looked impressive even though he had some handling problems.

There were 3,141 fans on hand, a top crowd considering the North Stars were on area television. Even more cars were on hand for the Sunday matinee, with almost 60 hobby stocks taking part along with the expanded field of 30 late models.