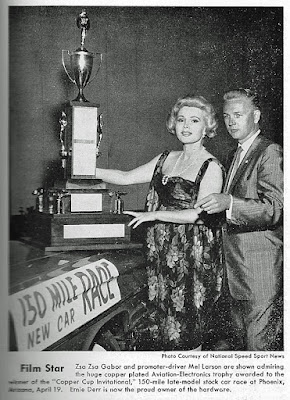 Ramo Stott, the winner in a fast-moving Ford finished 2.5 seconds ahead of Ernie Derr, driving a blazing black Pontiac.

The winning time was 2 hours, 3 minutes and 9 seconds over the one-mile track that gave little trouble except for dust in the south turn.

Nobody got hurt but there were some serious crackups. The most spectacular being a head on smack into the East wall by Jim Cook of Norwalk, Calif., when he lost control on the South turn.

A crowd of about 5,000 witnessed both Stott and Derr complete the entire 150 laps. Third-place finisher Bill Boldt of Los Angeles finished 148 laps while Bob Perry of Hawthorne, Calif., was fourth with 145 laps completed. Bill Dade of Redondo, Calif., rounded out the top-five finishers with 144 laps in the books.

Favored Parnelli Jones of Torrance, Calif., won the pole position in time trials and led the field for the first 30 laps. Derr took over, holding the top spot until lap 48 when Sonny Morgan of Beaumont, Tex., seized the top spot.

Phoenix’s Mel Larson, a co-promoter of the event, was in the lead for a few fast turns at the midway point until his 1959 Mercury conked out on lap 79.

That gave the lead to Stott, a spot he wouldn’t relinquish for the remaining 70 circuits. The 25-year-old speedster would collect $600 for the victory. His fellow townsman Derr, would take home $500 for his runner-up effort.


Editor’ Note – A day later, a re-check by International Motor Contest Association officials showed that Ramo Stott was actually a full lap behind Ernie Derr upon the completion of the 150 laps and declared Derr to be the winner and Stott credited with second-place.