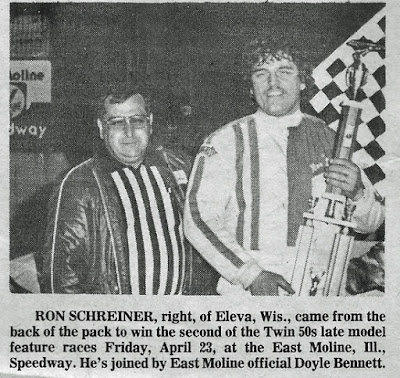 Thirty-three cars lined the pits and with such drivers as Johnny Johnson, Pete Parker, Leon Plank, Ed Sanger, Tony Izzo, Roger Long, Gary Webb and a young sensation to the area, Ron Schreiner from Eleva, Wis., the crowd was in for more than they had gambled for.

The top four in qualifying automatically made the feature with Johnson putting his J&J Steel Corvette in the 14-second bracket at 14.92. The other three qualifiers were Ray Guss Jr., Mike Chasteen and Ron Gustaf.

The top four in each heat, who were not qualified, then made the feature.

Ray Guss Jr. of Milan, Ill., won the first heat with his father Ray Guss Sr. taking the win in the second heat. Mike Chasteen of Peoria, Ill., was the third heat winner while Rollie Frink of Davenport, Iowa, won the semi-main and Bob Helm of Andalusia, Ill., grabbed second to also qualify for the main event.

The first 50-lap showdown saw Johnny Johnson of Morning Sun, Iowa, and Ray Guss Sr., setting the pace in the front row. As soon as the green dropped, Johnson was introduced to the wall, nose first, which sidelined him until the second 50-lapper.

Guss Sr. would lead from lap 1 through lap 23 when he encountered mechanical issues, allowing Jim Sandusky of Coal Valley, Ill., to motor by for the lead. It appeared that Sandusky was on his way to victory when his engine exploded on lap 41. Roger Long, the “Flying Farmer” from Fithian, Ill., would take advantage and lead the remaining nine circuits to seal the win. Pete Parker of Kaukauna, Wis., was second followed by Gary Webb of Davenport, Iowa.

The second 50-lap feature would be truly unbelievable. Dave Hammond of Camanche, Iowa, and Ed Sanger of Waterloo, Iowa, occupied the front row with Sanger getting the jump on the green and leading the first five laps. Ron Weedon of Pleasant Valley, Iowa, would scoot past Sanger for the top spot and hold that spot until lap 27 when Rollie Frink would take the lead.

Weedon would regain the lead on lap 28 as the race would see multiple leaders for the next few laps. Guss Sr. would get past Weedon on lap 33 but hold it for only one more lap as Weedon regained it again on lap 35.

As those two veterans battled it out, Ron Schreiner had come out of nowhere and was making his presence known. On lap 40, Schreiner got past Guss Sr. to take over second and three laps later, powered past Weedon for the lead.

But Schreiner wasn’t going to just pull away as now Gary Webb had moved past Guss Sr. and Weedon and was in second behind the Wisconsin hot shoe. Webb would make several challenges in the remaining laps, but Schreiner would hold on for the victory.

Weedon would hold on for third while Herschel Roberts of East Moline would get past Guss Sr. on the last lap to take fourth. Guss Sr. would be content with fifth.

What made Schreiner’s victory all that more impressive is the fact that he turned in the 32nd fastest time, didn’t qualify in his heat, finished fifth in the semi and was called upon as an alternate and started at the rear of the field.