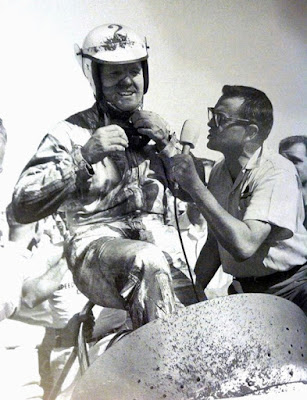 A.J. Foyt is interviewed by Chris Economaki following his 50-mile win at Langhorne.

Langhorne, Penn. (April 24, 1960) - A.J. Foyt of Houston, Tex., captured the overall sprint car championship at Langhorne Speedway on Sunday afternoon although a tire change forced him to lose his lead in the second half of the two 50-mile features.

A crowd of about 10,000 watched 25-year-old Foyt, who prefers to be called A.J., instead of Anthony Joseph, win the first half of the twin attraction, some 200 yards ahead of Don Branson, of Champaign, Ill.

Foyt was leading the second race when he was forced to make a pit stop on the 45th lap. He got back into the race but finished fourth. His total prize for the two legs of the unique double header was $1,258.

In the overall standings, Eddie Sachs, of Center Valley, Penn., was second, earning $900 Jim Hurtubise, of Lennox, Calif., who won the second race, and Branson tied for third place in the total standings for the two races.

The caution flag was out for six laps in the first race, from the 28th through the 34th. and this cut the speed down to 100.453 miles per hour.

In the second 50-lapper, an accident in the first turn on the first lap halted the action. Everything went smoothly after that, but the time was still slower than the first race – 30 minutes and 12.84 seconds.

Foyt, the second fastest qualifier, was lined up with Branson in the first row. Racing into the first turn, the pair touched wheels a few times and Foyt raced into the lead. He stayed there throughout the entire 50 miles. Branson finished second, just nipping Eddie Sachs at the wire. Wayne Weiler of Phoenix, Ariz., was fourth and Fred “Jiggs” Peters of Neshanic, N.J., took fifth.

After a 45-minute intermission the cars lined up for the second race in the order they finished the first event.

Foyt and Branson were again in the front row, but this turn Foyt had the pole. Foyt took the lead on the first turn, but behind him, Roger McCluskey of Tuscon, Ariz., bounced off the fence and Al Chamberlain of Altoona, Penn., spun off the track.

The lap counted for all and the race resumed with a single-file start. Foyt immediately built up a good-sized lead and seemed to be on his way to another victory. Then, on the 45th lap, his right rear tire ripped, and he hobbled in for a quick change.

With only five miles to go there wasn’t enough time for A.J. to catch up. Hurtubise, Sachs and Branson staged a thrilling duel behind Foyt during this race.

Hurtubise, who was 16th in the opener due to tire trouble, took the lead and beat Sachs by 14 seconds. Peters snuck in for third spot ahead of Foyt with Branson in fifth.