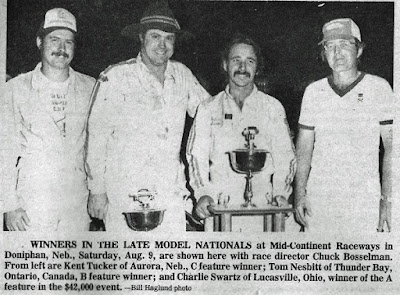 Doniphan, Neb. (August 9, 1980) – Charlie Swartz of Lucasville, Ohio, led all 50 laps on Saturday night to win the eighth annual Late Model Nationals at Mid-Continent Raceways.
Swartz, a 13-year racing veteran, pocketed $6,000 for the feature win in the $42,000 event.
Swartz, who ran Hoosier tires with “humpers” on the back, as did most in the 28-car feature, padded his lead throughout the main event and won by a sizeable distance over runner-up Larry Phillips of Springfield, Mo.
“I didn’t know how much of a lead I had because didn’t know who was in second,” remarked Swartz. “But I felt I had to be building some sort of lead.”
“The track got hard during the feature but we didn’t change a thing on the car,” he added. “In fact, the car got better, but I had to slow down somewhat because I ran the race without brakes.”
The car has been anything but slow for Swartz, however, as he’s recorded 10 feature wins, three seconds and one third in the 14 times he’s run in it this season.
Whereas the 1979 Nationals was dominated by Iowa drivers, who claimed the top five spots, and had nine among the top 13, this year’s main wasn’t dominated by any single group.
Following Swartz and Phillips across the finish line were Tom Helfrich of Haubstadt, Ind., Kevin Gundaker of St. Louis, and Bill Martin of Council Bluffs, Iowa.
Nine states and Canada were represented in in this year’s feature field. Nebraska and Iowa led with seven drivers each. Kansas had three; Minnesota, Missouri and Wisconsin had two each, and Indiana, South Dakota and Canada had one each.
Tom Nesbitt of Thunder Bay, Ontario won the B feature and Kent Tucker of Aurora, Neb., was the C feature winner.
While the feature paid $6,000 to win, there was still $1,000 riding on 11th place and $250 went to the last place car. The B main paid $500 to win and the C main paid $200.
Kent Tucker is the only two-time winner of the event, having taken the checkers in both 1974 and ’75. Bill Martin won in 1976, Ron Tilley of Council Bluffs, Iowa, took top honors in 1977, Joe Merryfield of Des Moines took the title in 1978 and Don Hoffman of Des Moines was the defending champion. Nebraska racing legend Bob Kosiski won the inaugural race in 1973.