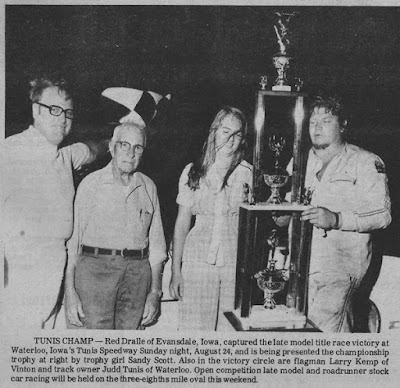 Waterloo, Iowa (August 24, 1975) – Red Dralle of Evansdale, Iowa, came on with a heavy foot Sunday night to win the 50-lap late model season championship feature.
Dralle started dead last in the 15-car field but finished first in a race that saw the favorite, point leader D. Arthur Nesteby of Waterloo, Iowa, make an early exit on lap 8.
Nesteby, who won three 25-lap features and the mid-season championship at Tunis this season, came into the third turn with his gas pedal sticking to the floor and he couldn’t make the turn.
He went off the banking, overturned once, and came to a stop on his side. Nesteby was not injured, but his car suffered significant damage to the front end.
Bob Hilmer of Dysart, Iowa, would take the lead when the feature’s green flag waved and led most of the way until gears went out of his quick-change and he was forced out after 27 circuits.
Dralle, who had steadily worked his way through the field, took over the top spot on lap 28 and led the rest of the way. Denny Osborn of Cedar Falls, Iowa, made several challenges to Dralle but couldn’t overtake the redheaded speedster.
Karl Sanger of Waterloo, Iowa, another favorite who was second in points to Nesteby, finished a strong third.
Tunis promoter Claus Stricker pushed the 50-lap feature up on the program when ominous dark clouds started moving early in the program.
The high winds and rain washed out the 15-lap consolation.