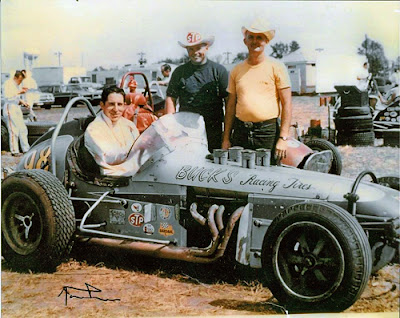 Eldon, Iowa (August 11, 1968) – A field of 22 of the top IMCA sprint cars invaded the Wapello County Fairgrounds on Sunday afternoon for the annual renewal.
Norm Paul of Auburn, Calif., would set fast time in the afternoon, touring the half-mile in 25.75 seconds, driving the Pittman Chevy Special.
The feature was in the true sense of the word a grand finale with the lead changing hands three times.
Ralph Parkinson of Wichita Falls, Tex., jumped into the lead on the first lap and stayed there for the next 10 circuits fighting off the constant challenges of Dick Sutcliffe of Greenwood, Mo., and Lee Kunzman of Guttenberg, Iowa.
Kunzman brought the Iowa fans to their feet when he put the L&M Speed Shop Special into the top spot on lap 11. Kunzman would stretch out to a commanding lead until a yellow came out on lap 16 when Jerry Blundy of Galesburg, Ill., and Cliff Cockrum of Benton, Ill., locked up in the second turn causing both cars to spin.
When the green dropped again, it was Norm Paul, who had started sixth on the invert, right on the bumper of Kunzman. Paul would go nose-to-tail with Kunzman down the backstretch and entering turns three and four, Paul would power past the popular Iowan on the inside.
From there, Paul would open up a three car-length lead over the final five laps and win easily. Kunzman would settle for second while Sutcliffe would take third.


Editor’s Note – The win at Eldon, Iowa, would be Norm Paul’s first and last IMCA sprint car win. A little over a month later, Paul would be involved in unfortunate crash while competing in Spencer, Iowa, and lose his arm. The accident would end Paul’s racing career.