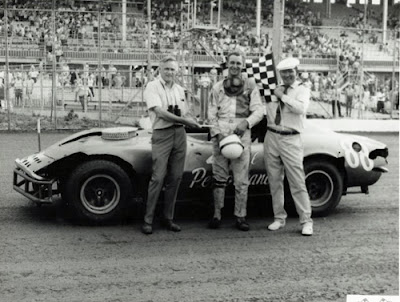 Earl Wagner of Pleasantville, Iowa, is presented the checkers and some hardware after winning at the Iowa State Fair.

Des Moines, Iowa (August 17, 1969) – Earl Wagner, Iowa’s super modified ace, stepped into Bill Moyer’s 1968 Corvette for the first time on Sunday afternoon and won the 25-lap late model feature at the Iowa State Fair.
Wagner, a Pleasantville, Iowa, plumber, started in the fourth row in the field of 23 cars and took a permanent hold on first place by lap 9 when previous leader Arlo Becker of Atkins, Iowa, spun out. Wagner collected $450 for his efforts.
Verlin Eaker of Cedar Rapids, Iowa, had been asked to drive Moyer’s car for the State Fair auto racing finale but according to Moyer, Eaker was competing in a USAC stock car event that same day.
Dean Montgomery of Milan, Ill., finished second and George Barton of Ankeny, Iowa, who finished fifth in the IMCA new model stock car contest on Saturday, captured third.
The most exciting race of the day was the 10-lap late model semi-main. Roger Dolan of Lisbon, Iowa and Bill McDonough of Cedar Rapids, Iowa, finished in a dead heat.