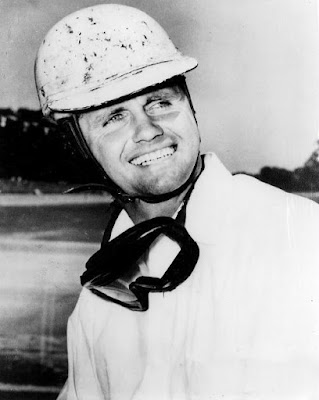 Cedar Rapids, Iowa (August 23, 1953) - Eastern Iowa fans will get a chance to see big time Triple A racing in 1954, but it won't be under the direction of race promoter Sam Nunis.


That was the announcement by All-Iowa fair officials Monday as the aftermath of a rhubarb Sunday afternoon that marred, an otherwise outstanding speed program that wound up the four racing events at the record-breaking 1953 fair.


Minutes after Bob Sweikert rolled to victory in the 25-lap feature event, Nunis instructed race announcer Chris Economaki to the fans that, because of poor support, Triple A would not be returning to Cedar Rapids in 1954.


Nunis complained that 6,500 fans were not enough to support Sunday's field, which included 14 Indianapolis 500 drivers and a record-breaking 16 Offenhausers among 21 cars, which timed.


Fair officials, officials and the drivers themselves disgruntled with the PA announcement, gave quick assurances to the crowd that Nunis was speaking only for himself and not for the Association, the number one racing group in the nation.


Such outstanding drivers as Johnny Parsons, Duane Carter and Tommy Hinnershitz – three of the top stars - gave assurances to fair officials that they were ready to return in ‘54, with or without a promoter.


“We don't want to give the fans the wrong impression about ,” one driver explained.


Fair officials later pointed out the 6,500 fans in attendance were only 1,500 below the average of 8,000 which Nunis-promoted shows had been drawing, and his races have been previously been staged in many larger towns, including Detroit.


One official pointed out that Nunis had received his guarantee of $5,500 which was what, his “own contract called for”. A report on Nunis' conduct has been forwarded to Triple A offices in Washington, D.C.


Otherwise, Sunday's program was outstanding, despite a poor track that was built up under Nunis' direction. In the time trials, seven cars timed well under 25 seconds and eight more were in the 25-second bracket.


Even in the final 25-lap event, with the track slowing noticeably under the effects of the week's hottest afternoon sun, Sweikert averaged 27.4 seconds a lap.


Sweikert, an up-and-coming young star, from Los Angeles, started outside in the front row, but fell off the pace in the early laps. He had to pass Jerry Hoyt a third of the way along for the victory. Jimmy Bryan, moving up fast, wound up in third place.


The top race of the day was a three-car dash, with a special $150 purse going to veteran Duane Carter in a photo finish with Fats O'Conner.


The field narrowly escaped an accident in the third heat when Don Freeland spun his Offy out on the second lap. After one lap under the caution flag, the race continued and wound up with Johnny Thomson in front in the creditable time of 3 minutes and 33 seconds.
Tommy Hinnershitz, one of the all-time veterans of dirt track racing and now in the process of winning his fourth straight AAA dirt track crown, had a rough day. Starting eighth in the feature, he and one other driver, signaled for a restart in the windup, but the signal was ignored.


Hinnershitz was dead last going into the backstretch and more trouble forced him out a lap later.


As a result, he didn't qualify for the feature.