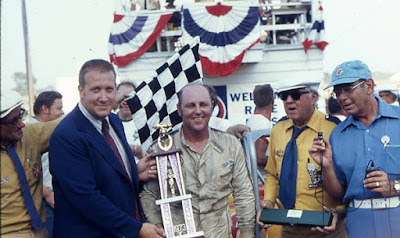 
Sedalia, Mo. (August 18, 1973) – Missouri State Fair secretary Ron Jones didn’t have it listed in his premium book and promoter Al Sweeney didn’t have it on the entry form but Saturday, August 18 was “Bill Utz Day” during the afternoon International Motor Contest Association sprint car program.
The hard-charging Sedalia, Mo., driver picked up a $1,000 in winning every event he entered in on the opening day of auto racing at the Missouri State Fair.
Just missing fast time in qualifying, Utz won the first heat, STP trophy dash and the 30-lap feature event.
The victory, captured on a car owned by Dean Hathman of Columbia, Mo., moved Utz from ninth to fifth in the IMCA sprint car point standings.
He waltzed to victory in the sprint car program after moving into first place towards the end of the event, powering past David Dwyer of Columbia, Mo., on a restart. Dwyer’s car had a flat right rear tire and ended up in tenth.
Jerry “Flea” Atkins of Holts Summit, Mo., was the second of 47 cars to time and found the dirt on the half-mile to his liking, turning in the afternoon’s fast time of 24.04 seconds.
Heat winners were Utz, Chuck Amati of Freeman Spur, Ill., and the current IMCA point leader Thad Dosher of Topeka, Kan. Jon Backlund of Kansas City won the 10-lap consolation.
The race track was baked under a 98 degree Missouri sun, turning the racing surface into a dry, slick track, providing many spinouts.
Del Schmidt of Topeka, Kan., finished second in the feature, Buzz Rose of Cedar Rapids, Iowa, was third, Gene Gennetten of Gladstone, Mo., fourth and Chuck Amati rounded out the top five.