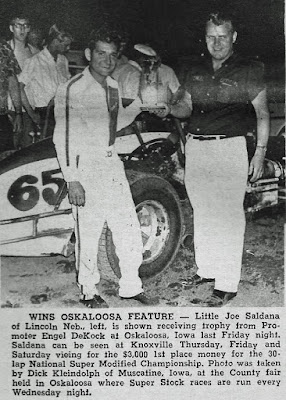 Oskaloosa, Iowa (August 2, 1968) – Joe Saldana of Lincoln, Neb., won the 15-lap super modified feature at the Southern Iowa Fair on Friday night.
Saldana led all 15 circuits but was never comfortable as Dick Sutcliffe of Greenwood, Mo., challenged Saldana all the way to the finish.
Earl Wagner of Pleasantville, Iowa, held third until almost losing it in the fourth turn on the white flag lap. Earl managed to bring his car under control but allowed Ray Lee Goodwin of Kansas City to slip past him for third place while Wagner settled for fourth.
Saldana set fast time to start the evening off with a time of 24.12 seconds on the wet, heavy half-mile.
Ray Lee Goodwin jumped into the lead on the first lap of trophy dash and added another trophy to his collection by winning the 6-lapper.
Earl Wagner won the first 8-lap heat while Stacy Redmond of Mason City, Iowa, scored the victory in the second heat. Wagner won the Australian Pursuit race and Del Schmidt of Topeka, Kan., was the 10-lap consolation winner.