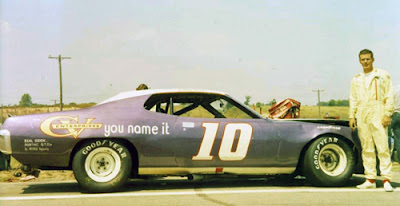 
Kaukauna, Wis. (August 8, 1971) – Bobby Unser of Albuquerque, N.M., made his debut on the fast half-mile tri-oval a memorable one as he scored a well-deserved victory in the Miller High Life 250-lap national championship on Sunday before a crowd of more than 11,000.
The curly-haired veteran of 23 seasons in the speed wars drove a 1971 Plymouth Road Runner engineered by Ray Nichels and owned by millionaire Chris Vallo.
Unser’s winning time was 1 hour, 39 minutes and 24.40 seconds, a new track record.
Unser shared the lead with Verlin Eaker of Cedar Rapids, Iowa, the fastest qualifier of the day at 22.13 seconds (81.337 mph). Eaker led from the drop of the green through 112 laps when he pitted for fuel and tires. Unser then led from lap 113 until the 130th circuit when he pitted for fuels and fresh tires as well.
Eaker would reacquire the lead and stay there until lap 156 when he made an unexpected stop for more fuel. That gave the lead back to Unser on lap 159 and he held it the rest of the way.
Eaker was more than three-quarters of a lap behind after his second stop and drove hard to make up the deficit. But when he started to close in on Unser just past the 200-lap mark, the USAC veteran stomped a little harder on the gas and pulled away to a safe margin. As the checkers waved, Unser had a 6.3 second lead over Eaker.