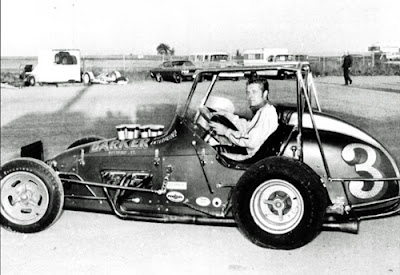 Topeka, Kan. (August 6, 1971) – Eddie Leavitt, the fleetest of super modified drivers, walked off with the biggest prize of the year at the half-mile Mid-America Fairgrounds on Friday, winning the Jayhawk National Championships.
Leavitt would post fast time in qualifying, touring the half-mile in 23.77 seconds, the fastest time this year on the track. He would win the 6-lap trophy dash as well, to assure himself of the pole position.
Leavitt wasted no time in opening up a lead in the 25-lap feature with the Hibbard boys, Russ and Roy of Slater, Mo., following Leavitt through the first lap. Thad Dosher of Topeka, who started fourth, and Gene Gennetten of Parkville, Mo., who started fifth, passed Roy on the backstretch of lap 3 and Bob Williams of Kansas City went by him as they exited turn four.
By lap 6, Leavitt was almost a quarter of a lap ahead of Russ Hibbard who was fighting off three contenders, Dosher, Gennetten and Williams, for second place. Williams would flip on the backstretch on lap 8, bringing the field to a stop and wiping out Leavitt’ sizeable lead.
On the restart, Leavitt once again moved back out front with Hibbard, Dosher and Gennetten waging the battle of the night for the next 10 circuits for second place. Dosher finally got around Hibbard on lap 18 and two laps later, had a firm grip on second place but was almost half a lap behind Leavitt.
Roger Rager of Mound, Minn., would spin on lap 21, bringing out a yellow and costing Leavitt another huge lead.
But right on the restart, Leavitt opened up a six-car length lead on Dosher and held it the rest of the way. Gennetten would make several attempts to get by Hibbard for third place but would end up in fourth. Roy Hibbard would round out the top five finishers.