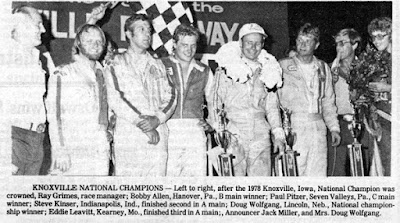 Knoxville, Iowa (August 12, 1978) – Doug Wolfgang, driving the Bill Smith Speedway Motors’ Chevrolet, won the 30-lap A-main at the Knoxville Nationals on Saturday night at the Marion County Fairgrounds.
The Lincoln, Neb., driver led all 30 laps after starting on the outside of the front row.
Steve Kinser of Bloomington, Ind., driving the Kinser Brothers Chevrolet, hung close and challenged the whole way, but had to be content with second place.
Eddie Leavitt of Kearney, Mo., the 1975 and ’76 champion, finished third in Max Roger’s Chevrolet and Shane Carson of Oklahoma City, driving Bob Trostle’s Chevy, took fourth. Danny Smith of Danville, Ill., rounded out the top five.
The hard charger on the evening was Jack Hewitt of Troy, Ohio, as he came from his 20th starting position to come home in sixth place.
Sammy Swindell of Germantown, Tenn., was the tough luck story of the night. Swindell, who started on the pole, didn’t even complete one lap as the rear end gear of his car tore apart and he was finished for the evening.