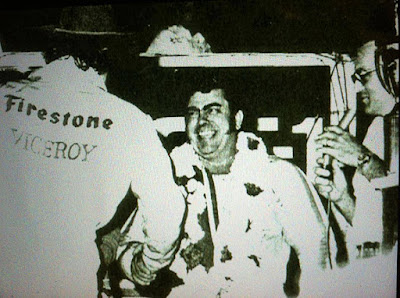 Dick Gaines is congratulated by Jan Opperman for winning the 1974 Knoxville Nationals as announcer Chris Economacki looks on.

Knoxville, Iowa (August 10, 1974) – After following Jan Opperman by distances of two to 20 car lengths for 29 circuits, Dick Gaines of Floyd Knob, Ind., charged hard off of the last corner to win the 14th annual Knoxville National Championships at the Marion County Fairgrounds on Saturday night.

The margin of victory was less than a car length.

Opperman, of Beaver Crossing, Neb., earlier had appeared to be on the verge of victory as he pulled away to a healthy advantage. Gaines would never allow Opperman to build an insurmountable lead, however.

As the leader throughout the race, Opperman appeared to negotiate traffic less loosely than Gaines. Gaines, considered an excellent chauffer in traffic, had earlier impressed race fans with the ability to maneuver through traffic.

Opperman indicated that he had probably not found the best gear, suspension and tire combination. The car had earlier taken some frame and axle damage from an accident with Stan Borofsky of Raytown, Mo. Borofsky’s car appeared to make a right turn on the front straightaway and it ran up over Opperman’s car as it was passing on the outside. The Borofsky car flipped wildly for some 100 yards. Borofsky was hospitalized with injuries described as not severe.

In the B-main, Larry Kirkpatrick of Wood River, Ill., charged from his eighth starting position to take the win. The race was Kirkpatrick’s first feature win at the half-mile. Finishing second was Doc Dawson of Lima, Ohio and Bob Moore of Phoenix, Ariz., raced from his 23rd starting spot to finish third.

In an accident-marred C-main, Bob Moore took an early lead and went on to win the 15-lapper.