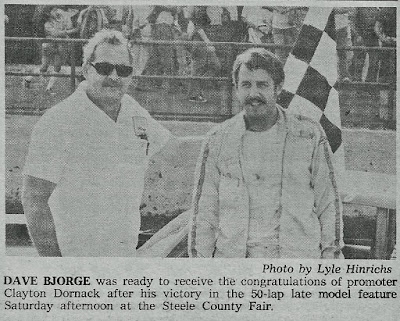 Owatonna, Minn. (August 16, 1975) – While others were spinning and crashing, Dave Bjorge was busy holding off Em Fretheim to capture the 50-lap Late Model Invitational feature at the Steele County Fair on Saturday afternoon. For his efforts, Bjorge picked up $600.
While Fretheim chased Bjorge, most of the early-race action was kept to position changes, but on lap 30, Ed Ward of Rochester, Minn., spun his Monte Carlo around on the backstretch. Luckily, all cars were able to steer clear of the mishap.
Ten laps later, in nearly the same spot, Dave Noble did not fare well either. Noble’s Chevelle ran head-on into the retaining wall at high speed. Although the veteran driver escaped without injury, his recently-completed car was badly damaged.
Fretheim made his final desperate bid on the last lap, nearly pulling the upset, but Bjorge was up to the challenge. Mert Williams was third, followed by Wendell Kuehn.
Dave Noble’s 19-year-old son, Mark, fared better than his father, driving a steady race and finishing fifth.