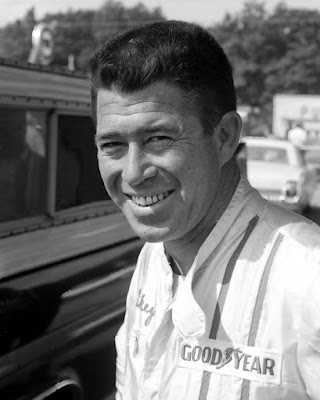 Langhorne, Pa. (August 7, 1966) - Roger McCluskey won’t be 36 years old until August 24, but he started celebrating yesterday when he won his first championship car race by capturing the 150-mile event at Langhorne Speedway.


McCluskey, better known in racing circles for his efforts with sprint cars, drove in his first championship car race here at Langhorne in 1960. He’s finished in the money often but never won a big car race until he scored a 15-second victory over Gordon Johncock yesterday.


McCluskey, of , received 25 percent of the estimated $23,000 purse. A crowd of 26,940 fans watched McCluskey lead the entire race, except for a short stretch of eight laps at the midway point.


The caution flags were displayed on three occasions for a total of 17 laps, due to spinouts Fortunately, there were no injuries.


McCluskey started the race second to Don Branson, but before the first lap was half over, Roger zoomed into the lead with his G.C. Murphy Special, a rear engine Ford owned by Lindsey Hopkins, and stayed there until the 79th mile.


Johncock, of , advanced to second place on the 76th lap and was right behind McCluskey at the start of the 80th trip around Langhorne's D-shaped asphalt surface.


McCluskey slowed up a little due to traffic and he reported later to check a possible engine overheating problem. Johncock took advantage and forged to the front. After a number of laps in which McCluskey convinced himself that his car was working fine, he then tore after Johncock.


He caught him on the 87th lap and by the 100th lap had a four-second lead. This was built up to eight seconds 10 laps later and when he got the checkered flag, Roger was 15 seconds, or nearly a half-lap in front.


The time of one hour, 22 minutes and 57.25 seconds and the speed of 108.493 miles per hour established a track record as this was the first championship car event ever staged at Langhorne at the 150-mile distance. 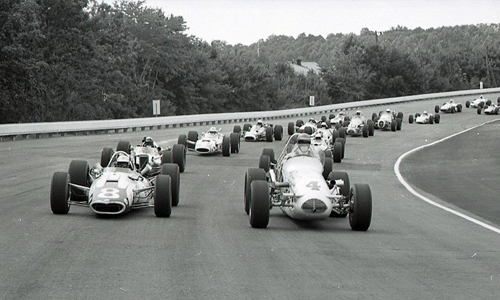 Don Branson (4) and Roger McCluskey (8) bring the field to the start of the Langhorne 150-miler.


Speaking of records, Mario Andretti, the , speedster, broke his own world record for one mile during time trials and then smashed up the car as he lost control between the first and second turn during his second qualifying lap.


The front end of the Dean Van Lines Special was damaged. Andretti, who was not hurt, then qualified in the Jim Robbins Special but after 33 laps he had to withdraw from the race due to mechanical problems.


McCluskey told reporters after the race that he “wasn’t very tired.” He then kidded, “I could’ve lasted one more lap.”


The winner was asked whether not he would be in favor of a longer championship car race at Langhorne. He answered, “This track keeps you pretty busy all the way around. I think 150 miles is enough.” But then he added, “If they ever have a 200-miler, I’d probably run it.”


Johncock, who finished second, took over the lead in the USAC point standings. Jim McElreath, who was leading, was forced out of the race early.


Al Unser finished third, followed by Gary Congdon and Don Branson. The first four finishers completed 150 laps, while Branson was a lap back.  The first three to cross the finish line drove rear engine Ford, while Congdon piloted a rear engine Offy and Branson stayed with a dirt Offy.