August 25 – The night was perfect and the racing fantastic at I-74 Speedway in Knoxville, Ill., on Wednesday evening. The race of the night would be the pro stock main event that saw Rod Smith of Monmouth, Ill., and Dennis LaVeine of Burlington, Iowa, would race side-by-side for almost the entire 15-lap contest before LaVeine prevailed on the last lap to score his second consecutive win on the half-mile.  The “Germantown Jet” Mike Chasteen led from start to finish in winning the modified feature. Rick Wages and Darrell McGhee would give chase but come up short, taking second and third respectively.   Mike Burns of Galesburg, Ill., would win the pure stock feature and Kurt Senner, also of Galesburg, took his seventh win of the season in the street stock division. 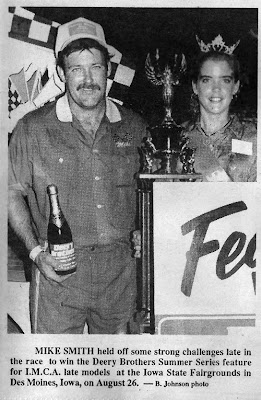 August 26 – Mike Smith Jewell, Iowa, led all but one lap in taking home the $1,000 prize in addition to lap money at the Deery Brothers Summer Series foe IMCA late models at the Iowa State Fair Speedway in Des Moines on Thursday night. With the win, Smith became the ninth winner in nine Deery Brother events for the season. Curt Martin of Independence, Iowa, would move his way thru the field and give Smith a run for the money in the final laps, but would settle for runner-up honors.  Craig Jacobs of Des Moines would finish third, Jeff French of Adel, Iowa took fourth and Kurt Stewart of Ainsworth, Iowa, earned fifth. 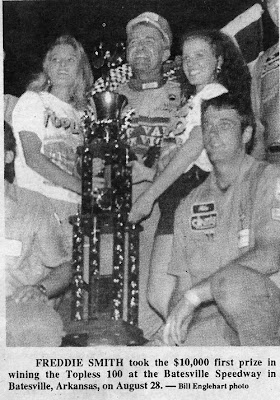 August 28 – Freddy Smith capped the biggest racing weekend in Batesville (Ark.) Speedway history by scoring the $10,000 Topless 100 feature win on Saturday night. Smith trailed hometown favorite Billy Moyer for the first 96 laps before Moyer had a right rear tire go sour sending him to the pits and Smith inherited the lead. Smith would hold off Bob Pierce of Danville, Ill., the final 3 circuits to seal the deal. Tony Cardin of Greenbrier, Ark., finished third, Jeff Floyd of Walnut Ridge, Ark., took fourth and Robbie Stanes of Dayton, Tex., rounded out the top five.
August 28 – Kim Mock capitalized on series point’s leader Dave Moulis’ misfortune and then out dueled Joe Roe to win the 25-lap Interstate Racing Association (IRA) Sprint Series headliner at Beaver Dam (Wis.) Raceway on Saturday. Moulis took command early from the pole, leading charging five-car train consisting of Roe, Mock, Larry Hillerud and John Tierney. Moulis continued to lead through lap 12 when a broken torsion bar caused the leader to slow to a stop. Roe would inherit the lead on the restart and lead Mock in a classic battle until a caution waved on lap 20. On the third and final restart, Mock would dive under Roe for the top spot and lead the final four circuits to score his second IRA win of the year. Roe finished second followed by Dale Peterson, Hillerud, and Tierney.
August 28 – It looked like Shawn Pfaff of Sparta, Wis., would run away with the NASCAR late model feature at La Crosse (Wis.) Speedway on Saturday night, but Kevin Nuttleman of Bangor, Wis., turned on the power and once again edged Pfaff for the victory. Pfaff took the lead at the onset of the race and built himself a commanding lead. By lap 18, Nuttleman had reeled in Pfaff and was on his bumper as the white flag waved. Coming out of the second turn, the two Oldsmobile Cutlasses raced side-by-side down the backstretch and into the final turns. As they came down the front straightaway, Pfaff and Nuttleman were door to door, but Nuttleman managed to nudge ahead at the start-finish line, taking his second win in as many weeks over Pfaff.
August 28 – Buddy Mullens of Wichita, Kan., showed why he was the national modified point’s leader in the National Championship Racing Association as he led 99 of 100 laps in the State Fair 100 at the Missouri State Fairgrounds half-mile dirt oval in Sedalia on Saturday night. Mullen’s 42nd victory of the 1993 season was worth $2,500, one of the nations’s higher paying, one-day modified shows. Stephen Muilenburg of Sparta, Mo., finished a distant second followed by Bobby Layne of Kansas City, Mo.
August 28 – Despite ominous skies, Hawkeye Raceway in Blue Grass, Iowa, plodded through its season championship night, with racing in four classes. Jerry Conners of Pleasant Valley, Iowa, closed out his championship season in the late model division by capturing feature win number 12.  Art Peppers of Davenport, Iowa, and Dave Engelkens of Morrison, Ill., would follow Conners across the finish line. The pro stock feature win went to Larry Digman of Davenport, Iowa, with the victory just enough to beat out Brian Meiners of Morrison, Ill., for the pro stock championship. Butch Cole of Kewanee, Ill., would take fourth in the modified feature, but that was enough to clinch the point’s title in that division. Rick Wages of Colona, Ill., was the modified feature winner. Bill Vande Woestyne of Silvis, Ill., would win the street stock finale but it wasn’t enough to catch Brad Cook of Davenport, Iowa, who clinched the championship. 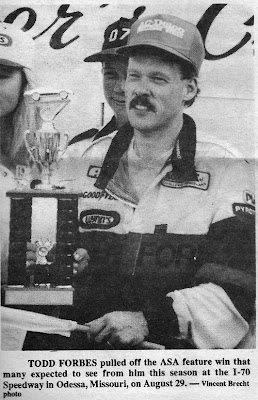 August 29 – Ohio native Todd Forbes led the final 119 laps in the Missouri 300 at I-70 Speedway in Odessa, Mo., on Sunday afternoon to score his first American Speed Association (ASA) victory.  Forbes started fifth in the running of the 300-lap event around the high-banked half-mile paved oval and ran with the lead pack throughout the race. Forbes took over the lead on lap 179 when he passed Harold Fair on the high side of the track in turn two and then fended off several challenges from seven-time ASA champ Mike Miller in the remaining laps.
August 29 – Ronnie Wallace of North Platte Neb., outran Gene Smith of Gibbon, Neb., down the back straightaway 12 laps away from the finish and went on to win the 20-lap late model feature at Platte Valley Speedway in Lexington, Neb., on Sunday. The win by Wallace, his second of the season, kept the driver’s slim hopes for a point’s championship alive, moving him within 14 markers of three-time defending champion Kent Tucker of Aurora, Neb. In sportsman division action, Doug Stange of Grand Island, Neb., ran down Denny Egge of Kearney, Neb., two laps from the checkered to pick up the win in the 15-lap feature.
August 29 – Former USAC star Roger McCluskey died after a three-year bout with cancer; he was 63-years-old. The Tucson, Ariz., native captured the USAC national championship in 1973, the USAC sprint car title in 1963 and ’66, and the USAC stock car championship in 1969 and ’70. His career spanned 32 years including 18 Indianapolis 500 starts. His best finish at Indy was third place in 1973.
August 29 – A new driver added his names to the list of feature winners at Wisconsin International Raceway in Kaukauna, Wis., on Sunday afternoon before a crowd of 8,685. Bobby Blount, known as the “Indiana Outlaw”, scored a thrilling win in the 150-lap ARTGO Nationals when race leader Matt Kenseth of Cambridge, Wis., tangled with Steve Carlson of West Salem, Wis., on lap 142, allowing Blount to scramble past the leaders into the top spot. It was Blount’s second ARTGO win of the year and his first-ever at the half-mile paved oval. Carlson would manage to grab second place and Bryan Reffner of Wisconsin Rapids, Wis., would garner the third spot.
August 29 –The point races at Cresco (Iowa) Speedway were so close coming into season championship night that the point’s champion in all three divisions weren’t decided until after the features. Mark Noble of Blooming Prairie, Minn., was the point leader in the modified division with Owen Grube of Cresco and Doug Hillson, also of Blooming Prairie, just a few points behind. Noble looked untouchable in the feature, building a commanding lead, until he slowed with mechanical issues four laps away from the checkers. Hillson, running second, would take command of the race, win the feature and earn the point’s championship. Mark Lewis of Riceville, Iowa, had a two-point lead over Kenny Farrell of New Hampton, Iowa, going into the stock car finale. Lewis would dominate the feature, leading every lap and winning handily over Farrell. Hobby stock leader Kevin Bidne of Decorah was six points ahead of Steve Holthaus of Cresco going into the feature. Holthaus grabbed the lead at the drop of the green and then held off repeat challenges from Bidne in winning the feature and championship.
August 29 – Gary Wright got a second chance and he used it to win the NCRA Outlaw Sprint Series “A” main at Monett (Mo.) Speedway on Sunday night. Wright’s second chance came on the opening lap around the high-banked 3/8-mile track. The Hooks, Tex., driver slid his sprint car off the top side of the track in turn four while out front giving the lead to Pete Butler. As Wright recovered, the red flag came out for Billy Turner who laid his car upside down in turn three. On the restart, Wright resumed his lead and held it through five more yellow flags to earn his 20th career NCRA victory and collect the $2,500 top prize. Danny Smith of Danville, Ill., would slide under Shane Carson of Oklahoma City in the late going to take runner-up honors while Carson would settle for third. 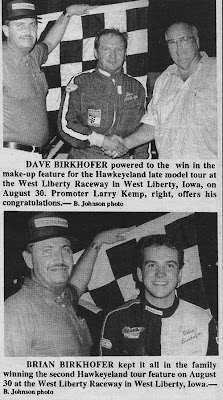 August 30 – West Liberty (Iowa) Raceway saw double late model features on Monday night as the Hawkeyeland Late Model Tour returned to the Muscatine County Fairgrounds. The first feature of the night was a makeup race from the August 11 rainout. Dave Birkhofer of Muscatine, Iowa, took the point from the drop of the green and never looked back in winning the 35-lap feature. Terry Ryan of Davenport, Iowa, was able to challenge Birkhofer on several occasions, but could only manage a runner-up showing. The second feature belonged to Birkhofer as well; only it was Dave’s son Brian scoring the victory in the 30-lap finale. Brian took the lead from polesitter Rollie Frink of Davenport, Iowa, in the early going and led the remaining circuits to record the win. Ron Boyse of Kalona, Iowa, came on strong late to nail down second place while Frink settled for third. With his two fifth place finishes in the double-header, Gary Webb of Davenport, Iowa, was able to clinch the 1993 Hawkeyeland Late Model Tour championship. 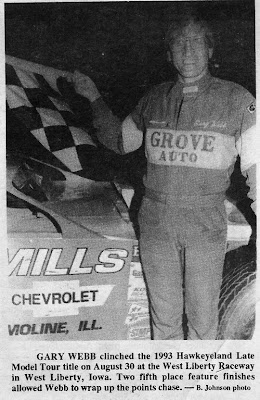 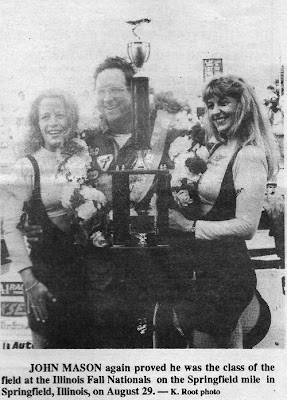