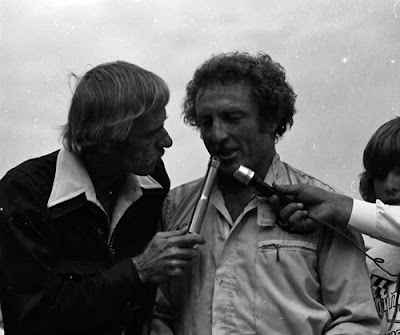 
West Allis, Wis. (August 10, 1975) – Sal Tovella, the talkative used car salesman from Addison, Ill., was willing to change the brand of tires on his car, but not the type of shoes on his feet Sunday afternoon.

The new tires and the old shoes formed a winning combination, he claimed, after winning the State Fair Week 200-mile stock car race.

“Why did I win?” he said. “Because before I ran on Goodyear tires, and this time I changed to Firestones. And with the Firestones, the car handled much, much better. I got mad at Goodyear after the Miller (200) in July, and so I switched. I’m glad I did.”

And the scuffed, black loafers?

“These are my lucky shoes,” he replied. “I usually wear sneakers like most drivers, but when I came up for the Miller, I forgot mine, so I had to wear these. Well, I won the pole in them, and I’ve been wearing them ever since. And I plan to keep on wearing them. Keep wearing the same uniform, everything; as long as I keep on winning.”

“It’s been a long time coming, but I always thought I could win a race at Milwaukee,” Tovella said.

Tovella took the lead for good when he passed Ramo Stott of Keokuk, Iowa (driving a 1975 Plymouth) coming out of the south chute on lap 171. After that, he was aided by caution flags on laps 174 and 190 that kept everyone in line for a total of seven laps. Tovella finally crossed the finish line four seconds ahead of Stott, in a total race time of 2 hours, 13 minutes and 52 seconds.

Stott, the only other driver to finish on the lead lap, had his own reason for why Tovella won – a mistake, claimed Stott, on the part of United States Auto Club officials.

“I should’ve finished a lap ahead of him instead of four seconds behind him,” Stott claimed. “What happened was, when I made a pit stop under the yellow on lap 85, the pace car didn’t pick up the number two car. They just sat there and let everybody go around a lap, and picked me up when I came out 12 seconds later.”

“So what happened was I lost what was almost a whole lap in the process. I lost all of those positions. Heck, it’s not the first time it’s happened. This happened to me at Michigan too. If they can’t pick up the right car in these situations, then nobody should be able to pit under the yellow and just run it flat out.”

Stott, the leader at the time, made his pit stop after the yellow appeared on lap 83 when George Coonrod spun in the north chute.

There was one disqualification. Irv Janey of Cedar Rapids, Iowa, who finished fourth, was ruled illegal after a check of his gas tank on his 1974 Charger showed that it held 25 gallons and not the 22 gallons allowed by USAC regulations.

That meant that Butch Hartman of South Zanesville, Ohio, who leads the USAC point standings, was awarded fourth place, which kept him ahead of Stott in the point standings, 1,130 to 1,110. Stott received 210 points for his second place finish.