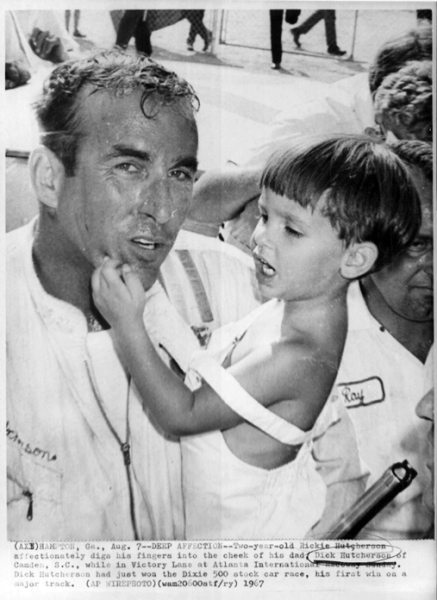 
Hutcherson, driving a 1967 Ford, averaged 132.248 miles per hour and collected $16,505 for his first place finish. It was his first superspeedway win since he started racing the NASCAR circuit in 1964.


Finishing second was Paul Goldsmith in a '67 Plymouth, followed by Lee Roy Yarbrough in a '67 Mercury. Donnie Allison in a '67 Ford was fourth, and newcomer Bud Moore rounded out the top five in a '67 Dodge Charger.


Hutcherson, who led four times in the race for a total of 91 laps, took the lead for good on lap 262 in the 334 – lap event over the 1.5-mile track. He moved into command when Petty's engine blew on the backstretch after the Randleman charger had regained the lead after losing time in the pits. The Plymouth driver had finished 25 straight races prior to yesterday, winning 15 of them. The last race Petty had not finished was the Atlanta 500 here on April 2.


Petty was the big leader in Sunday's race, gunning his Plymouth into the lead three times for a total of 121 laps. He finished 17th after the engine blew on lap 262.


Six caution flags, which waved for a total of 40 laps, slowed the race. The first came when Darel Dieringer spun his '67 Ford in the third turn and hit the wall. Oil on the track, brought out the second yellow flag, and the third came when Cale Yarborough spun on the backstretch after the right front tire blew on his '67 Ford.


Buddy Baker brought out the fourth caution when he slammed into the first turn guard railing as a result of the right front tire blowing on his Dodge Charger. Oil on the track from Buck Baker's engine brought out the fifth caution, and the sixth yellow flag waved when Bobby Allison spun and nicked the wall in the third turn when the engine blew in his car.


There were six leaders in the race. Aside from Petty and Hutcherson, Buddy Baker led four times for 73 laps, Yarborough two times for 28 laps, High Point's Jim Paschal was in front once for 15 laps and Charlie Glotzbach was in command for 4 laps. Only 15 cars were running at the finish.


Paschal, who finished 28th, was involved in the most freak accident of the day. It happened when Yarborough spun on the backstretch on lap 131.


While the caution flag was out Paschal roared down pit road for a pit stop. David Pearson, driving a Ford, was already in the pits, and pulled out of his stall right in front of Paschal. Paschal, unable to stop, rammed into the rear of Pearson's car.


When the cars hit, Paschal spun into the outside guard railing along pit road. The wreck damaged the left front and right rear of his Plymouth, and smashed in the rear of Pearson's car. Paschal was unable to continue in the race, but Pearson kept running, despite damage to the rear of his Ford.


Petty, who was going for his 18th victory of the season, which will tie him with Tim Flock for most victories won in a single racing year, was in good shape to win the race until his engine blew. Early in the race, on lap 83, he had pitted for tires and was in the pits when the caution flag came out on lap 84. Due to the early stop he lost a lap, but had battled back into the lead when engine trouble developed.


If there was a faster car in the field, it would have been Buddy Baker's Dodge, which was prepared by Ray Fox. Baker started third and took the lead on the first lap and held on to first place through lap 33 when he pitted.


When Hutcherson took the lead after Petty blew, he had a two lap command. He lost one lap to Goldsmith on a pit stop and another lap on the track, but coasted home well ahead of the Plymouth driver who ran flat out the last few laps in an attempt to overtake Hutcherson. But Hutcherson's lead was too much to overcome.