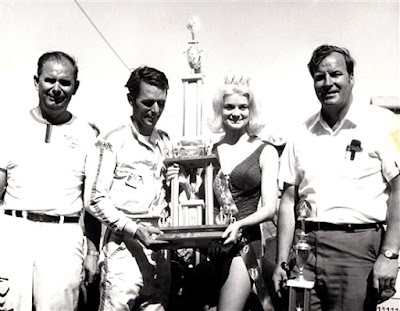 Emmett Hahn accepts his trophy from Ms. National Modified, Deborah Van Campen, after winning at Hutchinson. Hahn's crew, Denny Moore (left) and Hershel Goodnight (right) join him in victory lane. - Lies Family Collection.
Hutchinson, Kan. (August 1, 1971) - For the first time in the 15-year history of the National Modified Championship races a driver other than a Kansan is the champion.

Emmett Hahn, Tulsa, Okla., driving the #1300 John Zink Special, started from the pole position, set a blistering pace in the straightaways, slid cautiously through the turns and won the race by a margin of more than 100 yards over Grady Wade, Wichita, the second place finisher.
Herb Copeland, Dodge City, the 1969 champion was third; Ron Fowler, Chanute, was fourth and Dale Reed, Wichita, the 1970 champion was fifth.
The Kansas State Fairgrounds grandstand was filled to capacity for the 1971 feature. The race fans that came to see good races saw them. Fans, who came to see accidents, saw them, but for the first time in several years, the stand-by ambulances were never put to use.
Most spectacular from the crash-bang standpoint was the 30-lap semi-National. The excitement in this one started before the race got the green flag. Cars were started from the backstretch.
Three times they zipped under starter Al Alexander’s raised stand, but the cars were so far apart from the front to the rear of the pack, Alexander would not let them go.
On the fourth false start Sam Brittendall of Salina and Dutch Stuge, Bethany, Okla. Locked wheels in the straightaway, skidded sidewise and stalled. Both machines had to be towed away, and a field of 33 was reduced to 31 before the race started.
There were many other “reductions” this afternoon; Roger Blackshere, Oklahoma City, spun out, backed into the infield and then got back into the race. Charles Turner, Arkansas City, spun sideways, went into the infield and out again. Lawrence Petrie, Salina, was tapped into a spin, righted the car but it didn’t run right, thereafter.
Billy Patton, Oklahoma City, winner of the first race, skidded into the wall, but managed to get his car going again and safely onto the infield. Bill Cohee, Topeka, wasn't so lucky. He hit the fence and stayed there. Richard Powell, Enid, tried to take the turn one corner too high - couldn't get traction in the dust, and bounced against the fence, with the rear of his car swinging back ahead of the radiator. He scrambled up the wall to safety and none too soon.
Carl Allen Jr., Midwest City, was bumped on the turn and pushed into the soft stuff. He too banged the wall, and his car stalled against Powell's machine. Then, apparently blinded by steam from his radiator, Lavern Spreier, Rozel, just seemed to drive right into the wall where Powell had hit in the first place and his machine smashed into the other two.
Don Craig of Lawrence won this race. On the tenth lap he took the lead from Bud Hatch, Yates Center, and he was out front to stay. Mike Lutkie, Wichita, passed Hatch and challenged for the lead twice on the turns, but couldn't get past Craig.
There was another three-car mix-up in the National. Jerry Everhart, Wichita, spun into the fence at the south curve. H. A. Ratzlaff, Dodge City, skidded into Everhart. Thad Dosher, Topeka, the Missouri champion, crashed into the other two.
The ingredients of a messy pile-up were present when Dick Walker, Ark City, and Melvin Rogers, Oklahoma City, bumped on the North curve while both were trying to avoid a skidding car in front of them. Cars were coming at that corner at a mile a minute. Some braked, some bumped. Two cars jumped wheels of other cars. But thanks to some fancy driving, the mess suddenly cleared. All but Walker was able to keep going.
Ron Fowler, Chanute, came out of a sidespin on the third curve by pulling into the infield. He then jumped a big pile of dirt, got back onto the track and finished tenth. Evart Walton, Enid, spun out on the third turn. Bill Agar, Colorado Springs, watched most of the race from the infield after his car plowed the wall at the third corner.
And through it all there was Emmett, Hahn, riding high and low. In the middle, cutting in, cutting out, but always traveling fast and always out front.
The trophy dash was fast, and uneventful. Billy Patton, Oklahoma City, had the lead for three laps.
Then his car started slowing down and Aaron Madden, Oklahoma City, who went on to win, passed him. David Ross, Jetmore and Bill Bookout, Enid, also moved around Patton, taking second and third, respectively.
Billy Patton, Oklahoma City was an unchallenged winner in the first heat race. Don McElhinney, Wichita, passed Steve Kammerer, Wichita on the last lap, to take second. Jack Petty led all but the first lap in the second beat race. Sam Brittendall, Salina, was second and Wayne Hattahaugh, Lawrence, third. Terry Uehling, Ness City, banged the wall on the fourth curve and stalled. Ray Riner, Wichita, spun out of contention on the fifth lap.
David Ross, Jetmore, won the third heat race in a thrilling race to the wire with Bill Bookout, Enid and Evart Walton, Enid. Bill Criner, Oklahoma City and Chuck Robineit, Midwest City, Okla., were spinout victims in this one.
Dale Parsons won the fourth heat race, the one for fastest cars in time trials, with Aaron Madden, Oklahoma City veteran, finishing second and Ron Fowler, Chanute, third.
Harold Leep, Wichita, spun and appeared headed for real trouble as two racing cars were bearing down on him. One went in front of him, the other behind. Leep got his car straightened out but couldn't get back in the race.
Officials rated the field of cars and drivers best in the history of the event. Top drivers were here from tracks of Missouri, Iowa, Nebraska, Colorado, Oklahoma, Texas, Arkansas and Kansas; among them numerous track champions and several state champs.
Results –