1977 - Sprint car champ to be in lineup Friday night 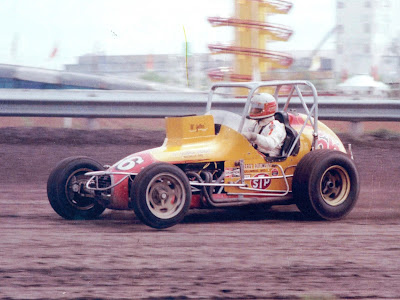 Bill Utz
(August 3, 1977) - One of the latest entries for the Knox County Fair’s IMCA sanctioned racing doubleheader for grand championship sprint cars Friday and Saturday is Bill Utz of


Utz, behind the wheel of the #56 Dean Hathman owned yellow, and red sprinter, drove his way to the International Motor Contests Association national championship in both 1974 and 1975.


After a third place finish in 1973 behind Thad Dosher and Gene Gennetten, Utz put together a winning season in 1974 capturing six individual features to beat out his nearest rival by 205 points.


Utz came on strong again in 1975. He won five features on his way to a second consecutive title. The last IMCA driver to win two consecutive titles was Jerry Blundy. He won the championship back to back in 1970-71.


Utz was after a third consecutive championship in 1976, a feat unequaled since Jerry Richert did it from 1964-1966. Utz missed one race and was hampered by mechanical problems in another and for his efforts he garnered a fourth place finish in the national standings, still only 185 points out of first place.


Utz is on the comeback and defending champion Ralph Parkinson Sr. wants the title for another year. Utz is in car #56 and Parkinson in the #65.


Also taking his first spin on the half-mile dirt and hauling in from , is Steve Howard. He will be behind the wheel of the #94, Chevy powered sprinter. Howard is in the for the fair season's slate of outstanding sprint car racing features.


Another driver to be welcomed into the ranks of the IMCA, and another driver to pay his dues against the best in the is Scott Wasilewski, originally from , and now calling home Scott drives the #2X Chevy sprinter.


A familiar car, a familiar face in the pits, and a tremendous IMCA supporter is Jim Utt of . Utt owns the #30 sprinter that has been driven by such men as Dick Forbrook, of , the late Larry Kirkpatrick, a spirited racer from , and Ralph Blackett, of . Some top-flight racers have driven for Jim Utt, and a new face in the #30 is worth watching. Another newcomer, Gary Johnson of , will drive the always-quick machine.


The seven-event program will begin at sharp with the time trials. The first of the qualifying heat races will begin at National Speedways, Inc. will officiate at the sanctioned race meet.