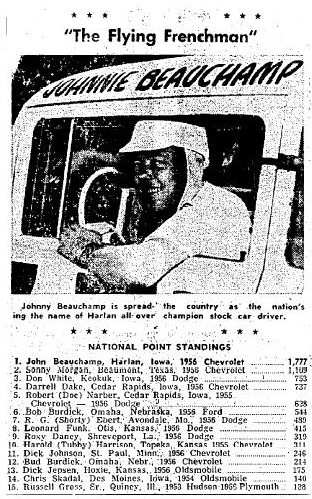 Harlan, Iowa (August 21, 1956) - The latest newsletter from the International Motor Contest Association shows that Harlan, Iowa's Johnny Beauchamp is still burning up the tracks in the  late model stock car ranks.
One of his latest achievements is a world record for one lap around a half-mile track in a stock car. In time trials at the fair at on August 3 he was timed at 29 seconds flat, which bettered the previous record of 29.23 seconds; also set by Beauchamp in , on June 16.
During the 11-day period from July 26 through August 5 Beauchamp won five of the six races he entered, giving, him 23 wins in 26 starts for the season.
“The Flying Frenchman’ continues to lead in the national point standings, but Sonny Morgan of Beaumont, Texas, has been moving up fast and now holds second.
Beauchamp's string of 10 consecutive victories was broken at ; on July 28th when Russ Gross of , beat him. But Johnny came right back with four more straight to start another streak.
Another recent accomplishment by Beauchamp was his doubleheader victory at , winning both features in separate races held in the morning and afternoon. Besides his record-breaking performance for one lap at Minot, N.D., he also won features there on two different days.
The stock car circuit is getting fast and furious now, with the state fairs underway. Beauchamp will be entered in races at , on Wednesday night; the Iowa State Fair in on September 2nd; and the Nebraska State Fair in on September 7th.
Other big-races coming up the next few weeks are at state and regional fairs in Fargo, N.D., St. Paul, Minn., Sioux Falls, S.D., Marshfield, Wis., Sedalia, Mo., Bethany, Mo., Belleville, Kan., Huron, S.D.; Topeka, Kan., and Spencer, Iowa.