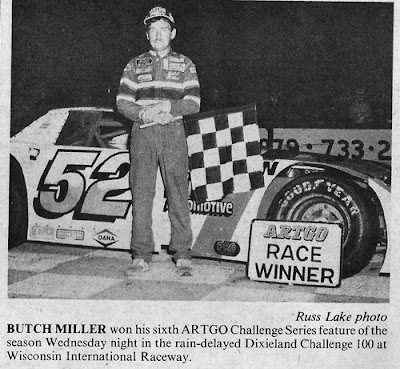 August 7 – Started on Tuesday evening and finishing on Wednesday night, the 5th annual Dixieland Challenge 100 saw Michigan’s Butch Miller take home the victory and collect the extra $1,000 bounty for defeating stock car legend Dick Trickle at Wisconsin International Raceway in Kaukauna, Wis. The 14th stop on the ARTGO Challenge Series late model circuit was postponed one day as rain halted the 100-lap event after only 3 laps were completed. After starting in the middle of the field, Miller and Trickle engaged in a side-by-side battle until Miller was able to gain command of the race on lap 81. He won by nearly 10 car lengths at the checkers. Trickle would take second followed by Alan Kulwicki of Greenfield, Wis., Tom Reffner of Rudolph, Wis., and Joe Shear of Lake Villa, Ill.
August 8 – Ed Sanger of Waterloo, Iowa, drove past Steve Fraise of Montrose, Iowa, on the 39th lap and went on to victory in Thursday night’s Busch-Winston All Star Series race at the Dubuque (Iowa) County Fairgrounds. Roger Dolan of Lisbon, Iowa, started up front and led the first 31 laps before Fraise got around him for the top spot. Fraise eventually finished fourth, behind Sanger, Dolan and Omaha’s Joe Kosiski. Dan Dickey of Packwood, Iowa, would round out the top five.
August 9 – Despite a sputtering motor, Paul Stubbs of Bentonville, Ark., passed Terry Phillips of Springfield, Mo., in the fourth turn of the final lap to win the 35-lap IMCA National Series modified race at Interstate Speedway in Springfield. Daryl Williams of Springfield took third while Mike Cothron of Moline, Ill., finished fourth on the fast 1/3-mile clay oval. 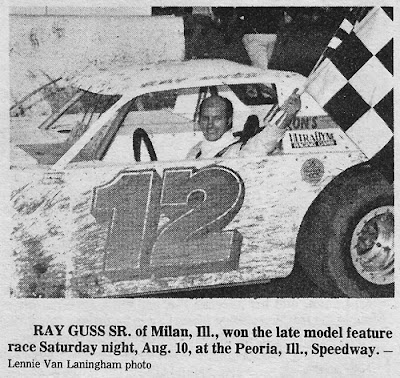 August 10 – Veteran stock car driver Ray Guss Sr. of Coal Valley, Ill., passed Rick Wages on lap 8 and the led the remaining circuits to win the 30-lap UMP late model feature at Peoria (Ill.) Speedway on Saturday. Jerry Wolland jumped into the early lead until Wages got around him for the lead. Wages’ lead was short-lived as Guss Sr. caught up with him on lap 6 and passed him for the top spot on lap 8.  Gary Webb, Wages, Don Bohlander, and Dan Bennett would chase Guss Sr. to the finish line. Rick Wages, puling double duty, took the lead on lap 4 of the 25-lap IMCA modified feature and breezed to victory.  John Durbin, in only his second night out with a brand new machine, would take runner-up honors with Mike Cothron taking third.
August 10 – Rocky Hodges of Des Moines, Iowa, claimed the 25-lap season championship race at the Marion County Fairgrounds in Knoxville, Iowa, on Saturday night. The victory paid Hodges $2,000 for a race in which he led flag to flag. Garry Rush of Sidney, Australia, in town for the upcoming Knoxville Nationals, took runner-up honors while rookie pilot Bruce Drottz of Des Moines claimed third. Arizonian Billy Boat took fourth followed by quick qualifier (17.408) Mike Brooks of Knoxville.
August 10 – Curt Martin of Independence, Iowa, won the late model feature and Gus Hughes of Monticello, Iowa, won the IMCA modified main Saturday afternoon during racing action at the Great Jones County Fair in Monticello, Iowa. Martin held off Jeff Aikey of Cedar Falls, Iowa, in the late model main event, while Hughes topped Merv Chandler of Cedar Rapids, Iowa, in the IMCA modified feature. In other action; Jeff Engelbart of Anamosa, Iowa, won the street stock feature while Rick Hurst of Dubuque, Iowa, scored the victory in the bomber division. 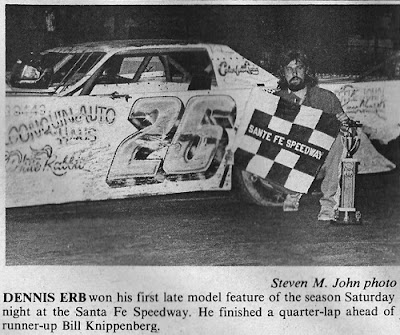 August 10 – Dennis Erb of Carpentersville, Ill., took the lead on lap 2 and went on to win his first late model feature of the season at Santa Fe Speedway in Willow Springs, Ill., on Saturday night. Erb won by quarter lap margin over Bill Knippenberg of Minooka, Ill. John Provenzano of Aurora, Ill., Al Johnson of Justice, Ill., and Larry Jackson of Lyons, Ill., rounded out the top five finishers.
August 10 – Doug Wolfgang of Sioux Falls, S.D., continued his streak as the hottest driver in sprint car racing on Saturday night when he captured his second Eldora Nationals crown in the 30-lap World of Outlaws event at Eldora Speedway in Rossburg, Ohio. Wolfgang added the Eldora Nationals title to his 1981 triumph in the event. Wolfgang stalked race leader Sammy Swindell of Bartlett, Tenn., for the opening 17 circuits around the high-banked half-mile clay oval before he pushed the Weikert Livestock #29 in front. Once he was at the point, Wolfgang pulled away to a half straightaway victory.
August 11 – Phil McCurry of Fair Grove, Mo., took the lead as Rex Merritt of Marionville, Mo., lost an engine 22 laps into the event, then sailed to victory in the IMCA National Series modified race on Sunday afternoon at the Ozark Empire Fairgrounds Speedway in Springfield, Mo. McCurry, a former street stock driver at the fairgrounds’ half-mile asphalt oval, won by seven car lengths over Dale Roper, also of Fair Grove. Vernon Reese of Westville, Okla., came all the way from his 22nd starting spot to finish third while Bob Walker of Miami, Okla., took fourth. A crowd of 3,500 attended the first annual Ozark Empire Racing Festival, which included the ARCA-sanctioned Pepsi 150.
August 11 – Dale Fischlein of Davenport, Iowa, emerged victorious in the Winston 50 late model event a Quincy (Ill.) Raceway on Sunday night, taking home the $1,000 first prize. Terry Meyers of Quincy took the initial lead in the event but was soon overtaken by Dan Dickey of Packwood, Iowa. Dickey looked like a threat to take the checkered but with only 10 circuits remaining, went to high and slipped over the edge of the quarter-mile track. Fischlein was there to take advantage and sailed to the easy win. Terry Gallaher of Hannibal, Mo., would take second followed by Mike Hoover of Vandalia, Mo. Hometown driver Mark Burgtorf took fourth ahead of Dick Crane of Palmyra, Mo.
August 11 – Patience was the watchword for Bobby Davis Jr., of Memphis, Tenn., on Sunday night as he dogged Doug Wolfgang of Sioux Falls, S.D., from the start and then held on to win the ninth annual Jayhawk Nationals at Lakeside Speedway n Kansas City, Kan. Wolfgang, the 1982 winner, started on the pole and led the first 20 laps with no sweat and appeared to be on his way to a flag to flag victory. However, on the 25th lap, his left front torsion bar broke and he lost the lead to Davis on lap 27. Davis collected $3,000 for the victory while a dejected Wolfgang earned $1,500 for second place.
August 11 – Ron Jackson of Burlington, Iowa, won the late model feature at Cedar County Raceway in Tipton, Iowa, on Sunday evening. Jackson held off Bill Breuer of Wapello, Iowa, to score the victory. In IMCA modified action, Bruce Hanford of Davenport, Iowa, took the feature win followed by Kent Kaplan of West Liberty, Iowa. The street stock main event was taken by Bruce Current of Maquoketa, Iowa, and Chuck Hanson of Cedar Rapids, Iowa, won the endure bomber feature. 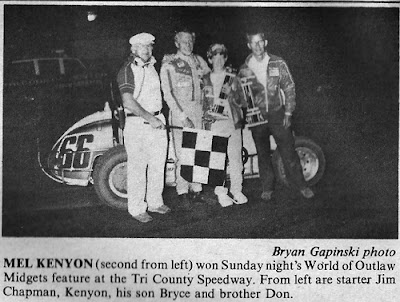 August 11 – Mel Kenyon took the lead for good from Kevin Doty on the 35th circuit and won the 40-lap World of Outlaws Midget feature at Tri-County Speedway in Mendota, Ill., on Sunday. Larry Hillerud led the first half of the race, fighting off Doty, Ed Loomis and Kenyon. Kenyon secured third place on lap 26, second spot on lap 29 and then took the top spot with five laps to go.
August 12 – Brad Doty set sail in his new sprint ride and kept it there as he won the 10th annual Jerry Weld Memorial on Monday night at I-70 Speedway in Odessa, Mo. Doty claimed $4,000 for winning his third feature in eight days in his new car. While Doty built up a commanding lead, Doug Wolfgang and Bobby Davis Jr., battled it out for second place for most of the race with Wolfgang finally gaining the upper hand. Garry Rush and Sammy Swindell rounded out the top five. 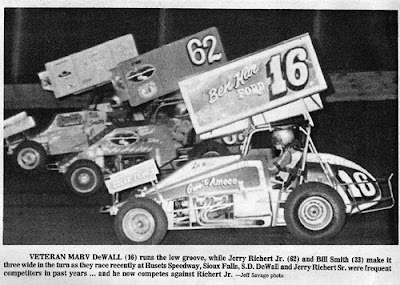