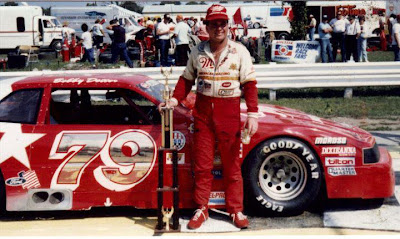 That strategy proved successful as the Wisconsin-based driver executed the plan to a tee, then held off hard-charging NASCAR defending Winston Cup champion Dale Earnhardt to capture his premier ASA stock car victory.


"We pretty much had a game plan all day to just pit one time," Dotter revealed. "We got stuck pitting early for a few seconds around lap 30 or 40. The car was overheating. The temperature was varying and water was coming out of the overflow, so we stopped and ripped the grill screening out.


"Then, we made our regular stop and took fuel and two tires on lap 169," Dotter continued. "Since that was to be our only stop, I had to run conservatively for the next 100 laps. Then at about 250, we finally just started going all out. Luckily, I was in front at that time.”


Fourteen lead changes among eight drivers highlighted the first three-quarters of the 300-lap event. Pole-sitter Earnhardt jumped out to the early lead, and then exchanged the spot with Michigan's Bob Senneker several times during the first 100 laps to the cheers of the large crowd.


Behind the wheel of the Miller American Ford, Dotter took control of the race for the third time after leader Fair pitted on lap 248.


After making his final pit stop for tires on lap 218, Earnhardt steadily made his way back through the field and moved in behind Dotter on lap 253.


The pair staged an exciting drive for the final 47 laps, with Earnhardt running his strongest after restarts.


It was after a restart for the race's final yellow flag on lap 277 that Earnhardt made his final last-ditch challenge. Exiting turn four, Earnhardt bumped the rear quarter panel of Dotter's Ford, and then pulled beneath him going down the front straight.


But, Earnhardt's lead was short-lived. The 35-year-old NASCAR star took his GM Goodwrench Camaro into turns one and two a bit too hard, allowing Dotter to sneak underneath him and retake the lead for good. He finished with a .51-second advantage lead over Earnhardt.


"I just went in too hard and slipped up the track and let him (Dotter) under me," Earnhardt admitted. "I could catch him on the restarts. It just took a while for his tires to come in. He was a little slippery and loose for a couple laps and we could race with him. Then he'd get hooked up and get away."


"The restarts were real scary," Dotter laughed. "He (Earnhardt) was faster than me two or three laps after a restart.”


"He just went into the corner too hard and we got under him," continued Dotter. "I think if Dale would have gotten around me and gotten away, we would have been real hard pressed to get around him no matter how fast I was running.


The win was extra special for Dotter.


Aside from being the 27-year-old's first in six years on the ASA circuit, the victory came at a time then the team needed a boost.


"We've been struggling," admitted Dotter, who took over the ride of 1986 ASA point champ Mark Martin when Martin moved up to the NASCAR Busch Grand National circuit this year.


"We have been through two crew chiefs and five crew members this year. Just this week half of our crew either quit or was fired. This is basically an all-new crew today.”


"Luckily, the guy that built the car (Mike Randerson of Green Bay, Wis.) came to be crew chief for me. That made all the difference," Dotter continued. "He dialed me in and helped me through it by telling me what I should be doing (via radio communication).”


"I can't say enough about Mike. Without him, there is no doubt in my mind that we wouldn't have won this race," assured Dotter.


After overcoming handling problems early in the race, Kent Stauffer turned in a fine run behind the wheel of the Liberty Ford/Flex Industries Ford. He finished fourth to tie for his best finish of his six-year ASA career.


"The car was pushing in the beginning and we were running a little slow," the 36-year-old driver admitted. "But we kept coming in and making chassis and tire changes and the car got better.


"We wanted to make two pit stops but we ended up making four. But it was a necessity."


Bobby Allison, the other NASCAR Winston Cup driver in the field, had a short afternoon. A broken valve spring retired his Miller American Buick to the pits for good on lap 21.


Seventeen of the 26 starters were still running at the end, with 12 of those on the same lap as the leader at the drop of the checkered.