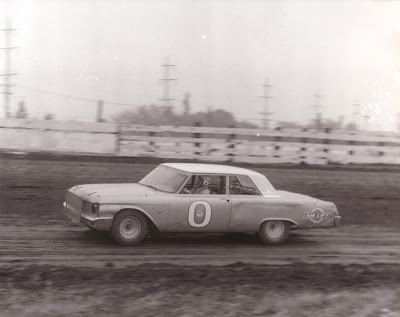 Because of cloudy skies and lightning, International Motor Contest Association (IMCA) officials moved the feature event to the middle of the program.
Just two heat races were run before the 25-lap feature in which Ramo Stott of Keokuk, season point leader, took the lead with two laps to go and hung on for win. Stott was driving a 1963 Ford because his own car, a 1963 , was demolished at on Sunday.
John Mickey of Columbus Junction finished seventh in the feature after beginning in the ninth row of cars, which started two abreast. Mickey was placed near the rear of the feature because spots were awarded according to heat finishes. Mickey didn't finish his heat after sliding over the south turn but remaining, on his wheels.
However, Mickey did come back to win a post-feature invitational race of five laps between himself, Lenny Funk of Otis, Kan., Dick Hutcherson of Keokuk and defending national champ Ernie Derr of Keokuk.
After it didn't rain following the feature, officials scheduled the invitational, consolation race, and a novelty event in which drivers completed a lap ran around the car, complete another lap, ate a piece of pie completed another lap, drank a bottle of pop, and finished the race.
The entire program, witnessed by 3,200 race fans, included 62 laps of racing and was completed in one and a half hours.
Late models compete tonight at Donnellson, in two races Sunday at Lacrosse, , and in a 101-lap feature Tuesday at Oskaloosa.