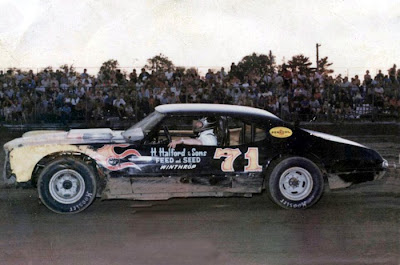 The physician claimed the 20-lap late model feature after taking the lead from early frontrunner Chuck Smith of on the seventh lap, holding on for a three car-length margin over eventual runner-up Red Dralle of Evansdale.
Mayner, who scored his second feature victory of the season Sunday night, also won the third heat by a comfortable margin after starting on the pole position and never relinquishing the lead.
Stan Stover was able to maintain his late model point lead despite the fact his 1972 Chevrolet Nova stock car was out of commission with a broken rear end. Stover's machine sustained the damage on the 16th lap of a Sunday afternoon race at the Iowa State Fair.
The Reinbeck circle-burner competed in a pair of borrowed cars, using Jim Mauer's machine in the semi-main before getting a ride from Denny Osborn in the feature, but failed to place high in either event.
Karl Sanger, the runner-up to Stover in point standings, could have taken over first with a good night and a feature win, but could manage only a fourth place finish in the main event.
The other two late model heats were won by sizable margins as 's Dale DeFrance captured the first 10-lap preliminary as Jack Mitchell won this third heat in as many weeks of late model competition in the second heat. Mitchell, of , competed in the sportsman bracket until that category was merged with the late models three weeks ago.
Smith claimed the 15-car, 15-lap semi-main as he took the lead for good from Raymond's Dan Etringer on the sixth circuit.
co-promoter Claus Stricker, a former stock car driver, was able to elude the two hound cars driven by Larry Johnson and Greg Heath, both of , to win the Hare 'N' Hound mini-demolition derby event.
's Mike Krall captured the concluding event of the evening, the roadrunner race.