August 20 – Stan Stover of Reinbeck, Iowa, captured his first super stock feature victory on the half-mile oval in Oskaloosa, Iowa, on Thursday evening. Stover jumped into the lead on the first lap and held it all the way to win the 15-lap event. It was a two-car battle for second place with a bumper to bumper finish as Ed Sanger of Waterloo, Iowa, out muscled John Moss if Iowa City, Iowa. Sanger would win the trophy dash as well as the second heat. Pokey West of West Chester, Iowa, was the first heat winner and Stove took the third heat. Moss won the Australian Pursuit and Mel Morris of West Liberty, Iowa, took the semi-main. 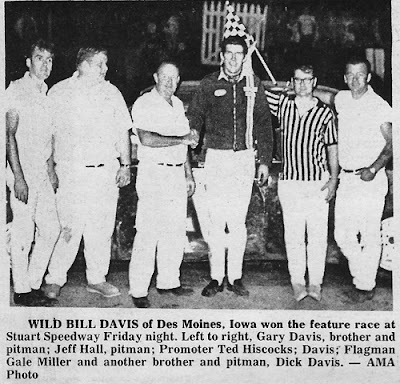 August 21 – Des Moines, Iowa’s Bill Davis, driving a 1956 Ford, made a clean sweep of the race program in Stuart, Iowa, on Friday night. Davis, only in his third year of driving, also took top honors in his heat and the Australian Pursuit.  Davis Bill Geil of Des Moines on lap 6 and then held off Del McDowell of Ames, Iowa, for the victory.
August 21 – Jackie Howerton of Tulsa, Okla., tied an all-time Fairgrounds Speedway super modified racing record when he won his eighth feature of the season in Tulsa on Friday night. Howerton, who has dominated the racing scene since early June, made it look relatively easy in winning the 20-lap main before 4,814 fans. Grady Wade of Wichita, Kan., was looking to sweep the evening’s program after setting fast time and winning both the trophy dash and his heat race, but had to settle for second place behind the lightning fast Howerton in the feature.
August 21 – Ray Guss of Milan, Ill., copped the 25-lap late model feature on the quarter-mile at Hawkeye Downs Speedway in Cedar Rapids, Iowa, on Friday night. Guss out dueled Waterloo, Iowa’s Red Droste to nail down the feature win. Droste would take second followed by Dale Snyder of Cedar Rapids, Iowa, Chub Liebe of Oelwein, Iowa, and Larry Wasserfort of Waterloo.
August 21 – Red Steffen of Eau Claire, Wis., maneuvered past an impressive field and won the 20-lap late model feature at Tri-Oval Speedway in Fountain City, Wis., on Friday night. Steffen started eighth and moved steadily to the front in taking the win. Leroy Scharkey of Rochester, Minn., took second, Wendell Kuehn of Rochester, Minn., grabbed third, Dave Noble of Blooming Prairie, Minn., earned fourth and Gerhard Wollenburg of Austin, Minn., rounded out the top five. 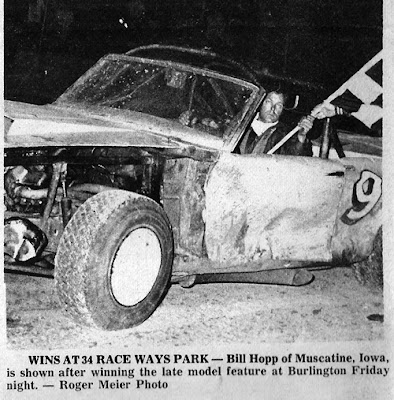 August 21 – Bill Hopp of Muscatine, Iowa, was second fastest in time trials at 34 Raceways Park in Burlington, Iowa, on Friday night, but that would the last time he followed anyone the rest of the evening. Hopp would win the match race, second heat and the feature event. In the feature, Hopp took the lead on the first lap and was never headed although Mike Brooks of Hartford, Iowa, Bill Newman of Burlington, applied constant pressure. In winning three of four events, Hopp moved from 12th place to 6th place in the point standings. 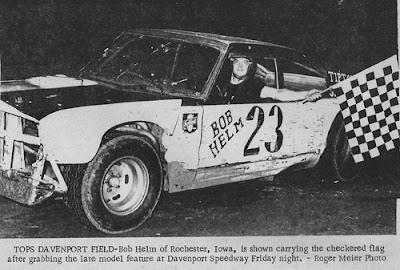 August 21 – Bob Helm of Rochester, Iowa, made his first trip down victory lane at the Mississippi Valley Fairgrounds in Davenport, Iowa, on Friday night. Helm battled with Jerry Reeder of Peoria, Ill., for the top spot for numerous laps before Reeder retired to the pits with mechanical issues. Helm would not be denied after that and cruised to the win.  Verlin Eaker of Cedar Rapids, Iowa, and Jerry Reinhart of Moline, Ill., waged their own battle for second place for 26 laps with the Illinois hot shoe nabbing runner-up honors. Eaker, Terry Ryan of Davenport and Lloyd Ewing of Kewanee, Ill., rounded out the top five finishers. 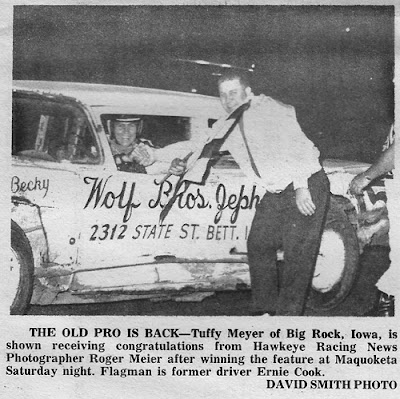 August 22 – Old pro Tuffy Meyer of Big Rock, Iowa, made his triumphant return and won the super stock feature in Maquoketa, Iowa, on Saturday night. Meyer took the lead away from Lloyd Nabb on lap 6 and then powered to an easy victory, his first of the season. Nabb settled for second while Jerry Hull finished third. 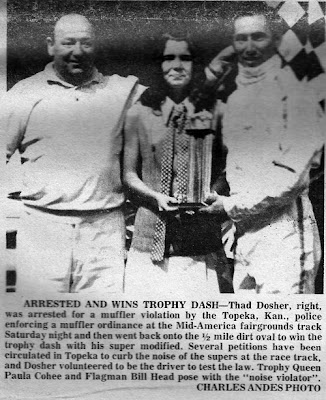 August 22 – Thad Dosher of Topeka, Kan., a former national super modified champion, was issued a summons for violating the city’s noise ordinance at the Mid America Fairgrounds in Topeka on Saturday night. Dosher was given the summons by city police following hot laps and before the program started. He had agreed beforehand to be the driver ticketed after the city attorney had ruled that just one driver be arrested for the violation. The races went on as usual and Dosher went to win the trophy dash and feature at the half-mile dirt oval.  Dosher left the track shortly after, drove to the city jail and posted bond.
August 22 - Ray Young of Dolton, Ill., won the 30-lap late model feature at Waukegan (Ill.) Speedway on Saturday night after Vern Brown of Wauconda, Ill., and Tom Jones of Northbrook, Ill., showed Young the quick way around in the preliminaries. Brown won the trophy dash and Jones score the heat win ahead of Young but there was no touching him in the main event. Bob May of Gurnee, Ill., would finish second in the feature with Brown, Jim Cossman of Waukegan and Bob Roper of Chicago following.
August 22 – Gene Schattschneider of Algona, Iowa, won the Kossuth Speedway season championship on Saturday night, thus clinching the point’s championship as well. Schattschneider held off Denny Hovinga of Lorenz in the 20-lap “A” feature with Ed Helmers of Algona taking third. Earl Tice of Ames, Iowa, earned fourth and Arnie Braland of Boone, Iowa, rounded out the top five.
August 22 – Ernie Derr of Keokuk, Iowa, added to his point total by winning the 200-lap International Motor Contest Association new model stock car race at the Iowa State Fairgrounds in Des Moines on Saturday afternoon. Derr took the lead on lap 54, overtaking Irv Janey of Cedar Rapids, Iowa, for the top spot. Keokuk, Iowa’s Ron Hutcherson would take second place after dueling with Janey for the last 50 circuits. Janey settled for third followed by Mel Morris of West Liberty, Iowa, Mike Derr of Keokuk, and Gordon Blankenship of Keokuk. Derr toured the 100-mile race in 1 hour, 32 minutes and 8 seconds, more than two and a half minutes better than his old mark set in 1967. 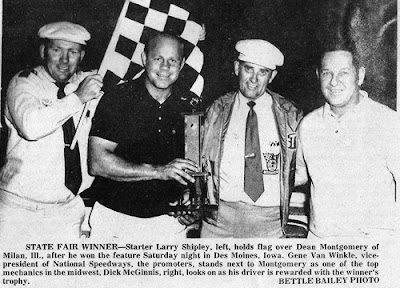 August 22 – A crowd of 13,500 watched Dean Montgomery of Milan, Ill., capture the 25-lap late model feature at the Iowa State Fairgrounds in Des Moines, Iowa, on Saturday night. Montgomery pushed his 1969 Chevelle into the lead at the beginning of the race and was never headed as John Moss of Iowa City, Iowa, nabbed the runner-up spot and Bill McDonough of Cedar Rapids, Iowa, took third. In sportsman action, Sonny Morgan of Blue Earth, Minn., took the 15-lap feature event over Jerry Roberts of Prairie City, Iowa, and Ron Perdock of Washington, Iowa. 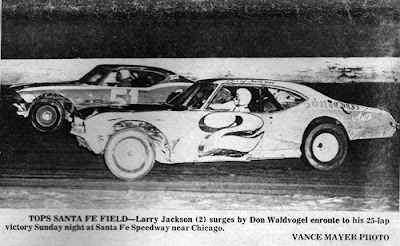 August 23 - Steady late model pilot Larry Jackson held off hard-charging defending track champion Don Waldvogel to win the 25-lap feature at Santa Fe Speedway in Hinsdale, Ill., on Sunday night. Jackson’s seventh feature win of the season was timed in 6 minutes and 52 seconds. Early pace setter Clem Lewandowski would finish third followed by Dick Nelson and Danny Albrecht.
August 23 – Arlo Becker of Atkins, Iowa, came from the back of the field to win the modified feature in Tipton, Iowa, on Sunday night. Jerry Hull of Cedar Rapids, Iowa, led most of the 20-lap event, but Becker caught him on lap 18 and the two drivers raced side-by-side for the remaining two circuits with Becker winning by half a car length as the checkers waved. Stan Woodie of Tipton took third, Steve Hansen of Wilton Junction, Iowa, was fourth and Wayne Settles of East Moline, Ill., rounded out the top five finishers. 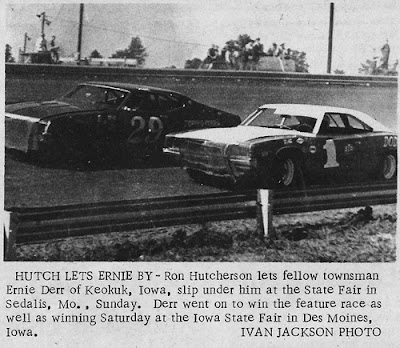 August 23 – Ernie Derr of Keokuk, Iowa, played a brief waiting game at the Missouri State Fairgrounds in Sedalia on Sunday afternoon, and then walked off virtually unopposed with the laurels in the IMCA late model stock car racing program before a sellout crowd of 15,000. Derr, starting in the sixth spot, moved up to challenge pole-sitter Fred Horn of Marion, Iowa, during the early laps, then took the lead on lap 7 and ran away from the rest of the field, winning handily. Trailing Derr’s 1970 Charger at the finish was Ron Hutcherson and Gordon Blankenship, also from Keokuk, Iowa. Horn would loop his 1970 Road Runner on lap 20, come back from dead last and finish fourth. Derr also set a new track record in qualifying, touring the one-mile dirt oval in 25.72 seconds. 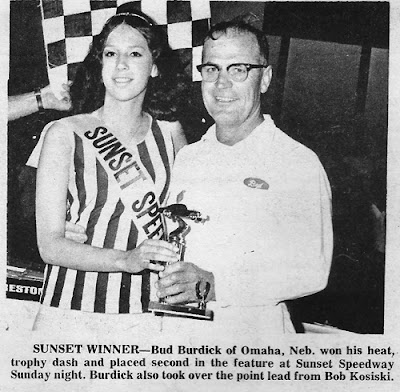 August 23 – Bill Wrich of Kennard, Neb., won the “A” feature at Sunset Speedway in Omaha, Neb., on Sunday night, but Bud Burdick may have scored a bigger triumph before a crowd of 2,539. The Omaha driver has been second in the point standings all season long behind Bob Kosiski, also of Omaha, but wrestled the point lead from him with wins in the trophy dash and heat and finishing second to Wrich in the feature. 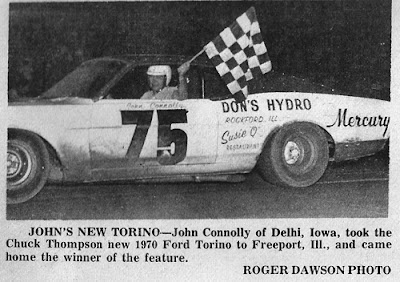 August 23 – John Connolly of Delhi, Iowa, out dueled Larry Fabris of Sycamore, Ill., to win the late model feature at Freeport, Ill., on Sunday evening. Fabris was on Connolly’s tailpipe most of the way but the Iowan was able to fend off each bid to grab the checkered flag and close the gap in the point’s standings, which Fabris leads in, 1,150 to 1,040. A crowd estimated at 5,000, watched Connolly bank $600 for the victory. Don Bohlander of Glasford, Ill., took third, followed by Joe Shear of South Beloit, Ill., and Arnie Christen of Mineral Point, Wis. 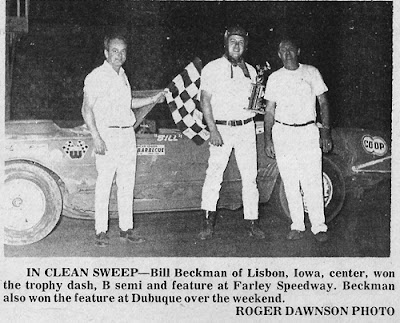 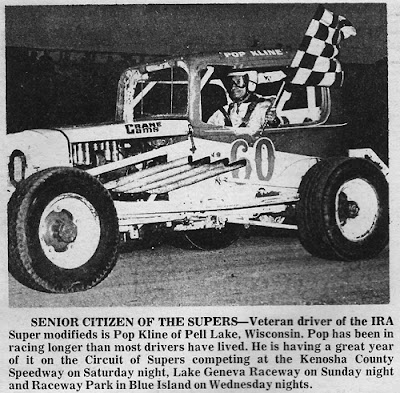