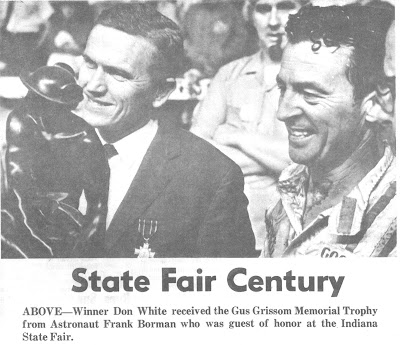 (August 22, 1969) – Don White wheeled the Nichels Engineering Dodge Charger to an early command in the Indiana State Fair Century and maintained a consistent lead to claim victory in the 100-mile event on Friday night.


A.J. Foyt, White’s most persistent rival throughout the season, was denied an opportunity to challenge White after briefly leading the event because of three unscheduled pit stops for tires, the last coming on lap 98 and resulting in a drop from second place to seventh.


Drivers cornered with minimal “dirt tracking” style. Supplementing his recent victory at , Butch Hartman bested the factory entrants in qualifying, guiding his ’69 Charger to a 40.92 second clocking, a tenth of a second better than White.


At starter Shim Malone’s signal, the 30-car field accelerated through turns one and two with White getting the upper hand on Hartman and Foyt following directly behind the White. On the backstretch, Foyt powered inside of White entering turn three, but that maneuver proved unsuccessful as A.J. speed and momentum put him into the loose stuff, giving the lead back to White.


They would stay in that order until lap 3 when Terry Nichels’ Dodge Charger went out of control, tearing through 40 feet of wooden retaining rail on the inside between turns three and four. Nichels’ car violently nosed into a light pole at the edge of the track, knocking don electrical lines and necessitating a red flag.


Most drivers took advantage of the red flag to pit and work on their cars and when they finally restarted, the running order was White, Foyt, Hartman, Al Unser, Whitey Gerken, Dave Whitcomb and Bay Darnell.


White and the pursuing Foyt pulled away from Hartman. On the ensuing lap, Foyt again attempted to get past White, working inside of him, but was forced to drop back to avoid Jim Pollard, who was spun out.


On the green flag restart, White darted out front again while A.J. fell slightly back. Hartman challenged Foyt for second but a few laps later, Butch terminated the duel as he headed for the pit area for more fuel. A few laps later, Hartman was forced back to the pits to have fender metal trimmed away from his tire, dropping him out of serious contention for the remainder of the race.


At the 30-lap point it was White, Foyt, Al Unser, Bobby Unser, Gerken, Jack Bowsher and Whitcomb. White maintained a two second lead on Foyt and was turning laps four tenths of a second faster than the pole position time while working past slower traffic.


Near the halfway mark, a mishap occurred at the head of the backstretch when Jim Lord flipped his ’67 Ford Fairlane. Also involved was Ross Smith in a ’67 Charger. Stopping for the wreckage, Jim Nusbaum was unavoidably hit by Dave Hirschfield. In an unrelated incident, Butch Hartman’s engine expired on the backstretch and had to be pushed to the infield.


At the resumption of the green on lap 59, Bobby Unser displayed a style of hard charging that moved his elongated , a strange sight on any dirt track, past his brother Al and into second place. The blue and gold number 15 “missile” was set in pursuit of White, but never came closer than five seconds to within the interception of the Keokuk, Iowa, veteran.


Eventually, it was Bobby who was caught from behind and overtaken as a hustling A.J. Foyt passed inside of Unser on lap 84 to regain second. The prospect of Foyt catching White, however, seemed doubtful. With 15 circuits to go, Don had an insurmountable 15-second lead.


Leading Bobby Unser by sixteen seconds, A.J. looked like he was a lock for runner-up honors even when he forced to pit on lap 98 for a flat right rear tire. Unfortunately, Foyt’s car stalled leaving the pits, allowing both Unsers, Jack Bowsher, and Roger McCluskey to move up a spot while Foyt’s crew attempted to re-fire his car. Foyt would finish a disappointing seventh.


Whitey Gerkin would finish sixth behind the factory entries in his ’69 Chevelle, an admirable job. Never dropping lower than eighth in the race, Gerkin maintained the fifth spot throughout the first 50 miles of the race. Another independent, Leonard Blanchard from , drove his ’67 Fairlane to a respectable ninth place showing.


For his victorious 100 orbits, White earned $9,237 for his efforts and the beautiful Gus Grissom Trophy, presented by Apollo VIII commander Frank Borman. 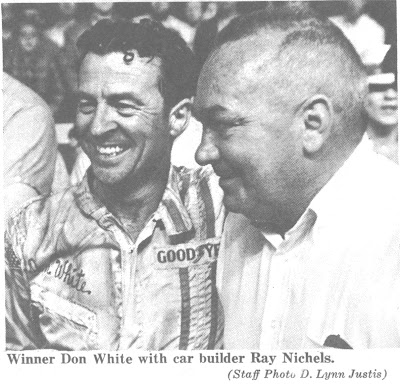