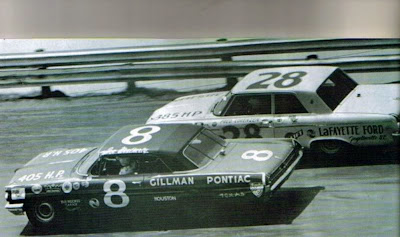 
Ona, W.Va. (August 18, 1963) - "Fearless" Freddy Lorenzen of Charlotte, N.C., overcame a brief romance with the guard rail in turn two and powered his 1963 Fastback Ford into the winner's circle in the first annual Mountaineer 300 at Ona on Sunday afternoon.

Lorenzen almost lost his car midway through the race when contact with Paul Clark of Mansfield, Ohio, forced the Lafayette Ford to kiss the guard rail near the score board. Lorenzen, who boosted his earnings to well over $93,000 for the season, had to cut his speed tremendously and give the lead to Joe Weatherly.

Weatherly, who finished second, gained the edge by as much as eight seconds until a mishap involving Wendell Scott and Clark forced a restart. Weatherly was getting low on rubber and took the pace lap in the pits and Lorenzen roared by.

Weatherly, leader in NASCAR's point standings, gave up one lap to Lorenzen who rode to a rather victory for the last 20 laps. Lorenzen finished the race in 1hour and 53.45 minutes for an average speed of 59.34 miles per hour.

One reason the average speed was so low was a lengthy crack reopened in number one turn after some 50 laps. The crack began as a thin line but developed into a gully by the end of the race. Many of the cars had to slow down considerably to protect tires, but Lorenzen worked out a path to straddle the trap.

Richard Petty, the pre-race pick by the sportswriters, was an early headache for Lorenzen. Petty, in one of the two Petty Plymouths, did a masterful job driving his vehicle through the pack to stay on Lorenzen's bumper for the first 100 laps. Petty took the lead at one point in the race when he streaked through a hole going into the first turn.

His lead lasted only two laps, however, as Lorenzen's fast-back Holman-Moody Ford showed its power by outgunning the Plymouth on the back side for a car length lead.

Petty again took the lead when Lorenzen made his first pit stop when a wreck slowed down the traffic. While Freddy rolled into his pit, Petty streaked by to take the lead. Weatherly followed Lorenzen into the pits and it looked like Petty would clinch the race.

But, the Petty Plymouth began to smoke and the pit crew ordered the driver in for a check before making another lap. The pit stop lasted at least five minutes - as the Plymouth was losing grease in the rear end - Petty even climbed out of the car - and the best Richard could finish was 10th.

Jim Paschal of High Point, N.C, drove a 1963 Plymouth to a third-place finish, and Ned Jarrett of Conover, N. C., was fourth. In all, the event was slowed down seven times because of minor mishaps and blowouts but no major wrecks or injuries occurred.

Junior Johnson of Ronda, N. C., who collided with Clark in the first few laps before the judge’s stand, was one of three drivers who did not finish the race. Johnson was forced out when he developed brake trouble.

Before receiving a congratulatory kiss from Miss West Virginia, Karen Childers of South Charleston, Lorenzen was asked about the crack in the track. "It really didn't bother me," Lorenzen answered, "because everyone had the same thing to contend with.

“I found there was a certain way you can go into the turn and straddle it (the crack), but sometimes when a slow car was ahead there was no choice but to go into it."