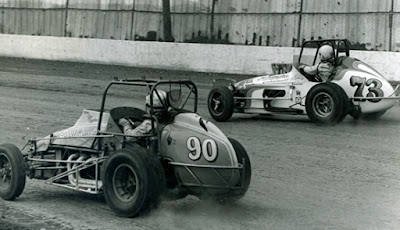 Reading, Penn. (March 24, 1974) - Bill Puterbaugh of Indianapolis, Ind., scored his first USAC sprint feature victory since 1971 by prevailing in the first 40-lap event of the season at Reading Fairgrounds on Sunday afternoon.

Starting in eighth place, Puterbaugh took the lead from Jan Opperman, Beaver Crossing, Neb., on the 23rd lap and then battled Duane Carter Jr., who finally submitted to a spinout that forced him to the back of the pack on the 36th lap.

Osborne captured the 10-lap semi-feature. George Snyder of Indianapolis clocked a 23.50 as fastest in the time trials.