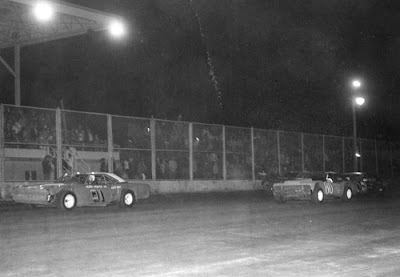 Fred Horn (01) leads Bill Zwanzinger (80) and Bill McDonough (inside of Zwanzinger) and Verlin Eaker (21) to the checkers in the late model feature at Hawkeye Downs Speedway on May 4, 1973.


“I was after those Chevrolets,” volunteered Horn with a wry smile.
More than three-fourths of the Downs’ entries are Chevy products and Horn admitted that situation provided added incentive.


“You bet it does!” he said. “You can't give 'em all the money.”
Horn, who said he “didn't get a break all of last year” while racing at the Downs, got a couple this time around.
And he knew it. One was his third-place starting position in the 17-car field. But the biggest break came when Evansdale's Red Dralle, who led the feature from the opening lap, was sidelined by a flat tire on his 1971 Chevelle on the 11th tour around the half-mile dirt oval.
Horn started honking from that point, but he didn't leave any of the next three machines in his wake. A restart on the 18th lap was of no consequence, except to keep the crowd of 3,046 (paid) on the edge of their seats.


Zwanziger (1971 Nova), McDonough (1965 Chevy II) and Eaker (1971 Nova) remained in a bunch behind Horn the rest of the way, with McDonough nipping Eaker by a bumper for third place.


Horn, who collected $500 for his triumph, said the restart didn't make him nervous. “It just gave me time to rest, “he said. “I'm pooped - I'll have to do some pushups to get in shape it the track remains like this.”
“It was a hemi track tonight - tacky and biting good but it was so rough that I'll probably have to overhaul the whole car. It would bottom out on every corner."
Zwanziger echoed those same sentiments when asked if he considered making a move for the front spot in the late going.
“It was too humpy to make a move,” he explained. “It was too big a gamble. I was liable to lose the position I had.”


Horn in the third heat, Zwanziger in the Australian Pursuit, Eaker in the consolation and Dralle in the second heat captured other events. Washington's Ron Perdock (1972 Monte Carlo) won the first heat. Time trials were not held because of faulty clocks.
Chuck Lukemyre of Tipton won the season opener for the Sportsman division. The heat event was claimed by Ron Lint of Cedar Rapids, who was second in the feature.