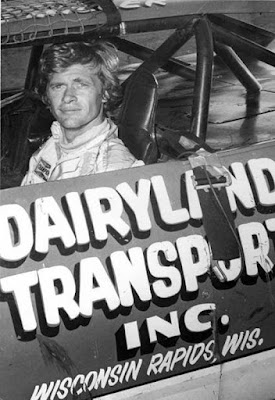 
Miller, who started in the 12th position, quickly made his way through pack. Ron Beyer jumped into the lead off the pole position, but Miller overtook Beyer on lap 6 to lead the 17-car field.


Back in the pack, Marzofka moved past Ted Buelow to take third on lap 17, but was nearly a full straightaway behind the leaders.


Dick Turner, Orv Buelow and Morie Delmore tangled in turn two on lap 20, bringing out the first yellow of the race.


The caution allowed Marzofka to close tight behind Trickle’s bumper as racing resumed and the battle for second place began.


A second yellow occurred on lap 25 when Buelow, Joe Kryzkowski and Turner tangled coming out of turn four and hit the wall. Only Turner was able to continue.


Under the green for the final five circuits, Marzofka ducked under Trickle and took second on lap 27, but Miller had built a two-car length lead as the battle for second wore on and he recorded the win.
Steve Carlson of La Crosse, Wis., rode his 1978 Camaro to victory in the 15-lap hobby stock feature, edging Jay Sauter of Necedah, Wis., and Mike Niles of Holmen, Wis.