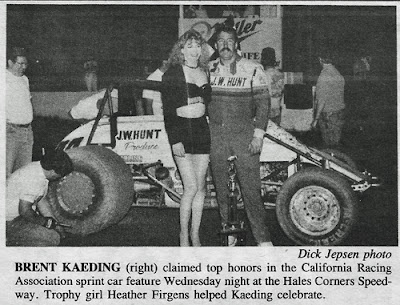 Franklin, Wis. (May 15, 1991) – Brent Kaeding survived a race-long duel with Richard Griffin to claim the 30-lap California Racing Association (CRA) non-winged sprint car feature Wednesday night at Hales Corner Speedway.
The start of the feature was slowed by three mishaps before a lap could be completed. CRA officials ordered a single-file restart. Kaeding and Griffin, the front-row starters, then paced the field the entire 30 circuits.
After five laps Kaeding and Griffin and broken away from the rest of the 20-car field and near the halfway point the top duo nearly had a straightaway lead over third-place Randy Sippel.
On lap 16 Griffin closed in on the leader and two laps later edged past Kaeding. The two then worked through lapped traffic with Griffin using the high groove while Kaeding worked the low line.
Kaeding waited for his opening and on lap 24 powered inside of Griffin to regain the top spot. For the rest of the way Kaeding was able to stay out of Griffin’s reach to take the checkered with two lapped cars between them.
Jack Hewitt placed well behind in third followed by Sippel and Cary Faas.
“Running around the yellows hurt us on fuel,” Kaeding said, referring to the three restarts. “We have a fuel shutoff valve and I kept turning it off.”
Earlier in the evening Ron Shuman won the B feature while Jim Moulis, Bob Robel, Griffin and Mike Frost. Shuman also won the trophy dash.